Welcome to the Masquerade Ball Blog Hop! Today, I’m hosting one of the other authors of Masquerade: Oddly Suited, but it’s down to you to work out which one! Each author will “unmask” his or her own character on April 30th-our release day!

So, here a few fun facts about my mystery guest:

“I’ve been writing stories since I learned to put words on the page. When I was twelve, I wrote lots of poetry and song lyrics. I’m too embarrassed to let anyone see the song lyrics, though. I once lost an entire novel that I had written when I switched computers, only to rediscover it years later on a flash drive I forgot I had. The novel in question isn’t very good, but it’s nice to have it again nonetheless.”

Read on to discover an exclusive bonus scene by the anonymous author that you won’t find in the book, as well as the beautiful fan art that Elizabeth Mueller created for my guest’s character. 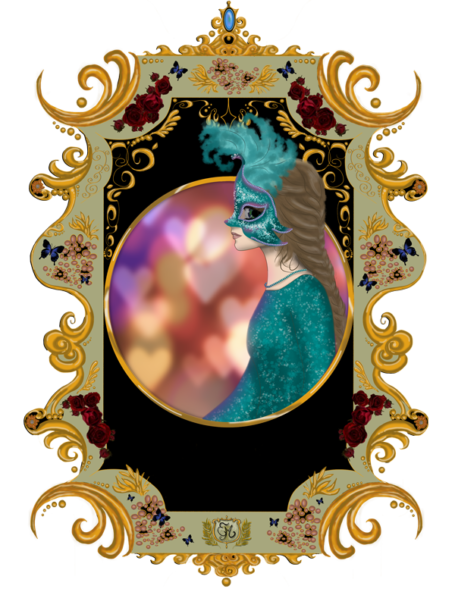 Adam leaned toward me, his smile radiant. “What do you think?”

My stomach flipped. Having been distracted by the way his chestnut hair fell into his eyes, I only heard part of his grand idea. At least I heard enough to respond. “Um…that sounds great and all, but there are a few issues.”

He raised an eyebrow, causing my heart to skip. “What kind of issues?”

I bit my lip. “We can’t show the volcanic eruption. The best we can do is a papier-mâché volcano, and that wouldn’t look threatening. And getting good stock footage to use would cost too much.”

He sighed. “Our budget is an issue.”

I rolled my eyes. “Our budget for this video is $20. That’s a little more than an issue.”

He flopped back in the plastic chair and stared at the ceiling for a long moment. “Okay. We won’t show the volcano. We can still make that work. If we use sound effects and rely on dialogue, we don’t need to show the eruption itself. The panicked people running through the streets should be enough to show the urgency of the situation.”

I pictured one of us shouting “BOOM!” just off camera to create the sound effects. It took great restraint not to laugh at that image. “There are five of us, though, and only four can appear on camera at a time. We’d need a lot of extras.”

“We could come up with a few people.” He swung his arm wide, as if indicating the entirety of the otherwise empty band room. Of course, he meant to include the whole school in the gesture. While it was also mostly empty at the moment, that wouldn’t be the case for long. The first class of the day started in thirty minutes. “I’m sure some of our classmates are willing to run and act terrified.”

He had a point. If anything could get our classmates to volunteer their free time, it had to be the prospect of hamming it up for the camera. “Maybe you’re right, but what would we do about traffic? We’d need to pick a desolate street to do this safely, and it might raise the question as to why we have dozens of people running down an otherwise empty road in the middle of nowhere.”

Adam narrowed his eyes at me, though a faint smile graced his lips. “Okay, okay. I get your point. We need to narrow our focus, then. Zero in on a small group of survivors and how they interact.”

“Now you’re talking,” I said with a smile. “It can be like a bottle episode of a TV show. Maybe we could shoot out in the woods and have four people on camera. There’s still a lot we could do with that.”

He nodded, though a hint of disappointment lingered in his expression. “I wish we could do so many things,” he said wistfully. “Most of my ideas are impossible.”

I lay a hand on his forearm. The warmth of his skin wiped all words from my mind for several moments. By the time I pulled myself together, he was looking back at me with a curious expression. “I’m sure you’ll eventually get to make the movie of your dreams,” I said. “Just give it time.”

Before Adam could reply, the door swung open and Gretchen stepped through. Noah and Claudia were right behind her. I yanked my hand away.

“It’s about time you got here,” Adam said as he turned toward the rest of our production team. “We were about to get started without you.”

What a great teaser! I love the fan art Elizabeth created too.

Intrigued? You can find out the identity of the mystery author and their masked character on April 30th!


Find love at the ball…

Can a fake dating game show lead to love? Will a missing key free a clock-bound prince? Can a softball pitcher and a baseball catcher work together? Is there a vampire living in Paradise, Newfoundland? What’s more important—a virtual Traveler or a virtual date to the ball?

Hand-picked by a panel of agents and authors, these ten tales will mystify and surprise even as they touch your heart. Don your mask and join the party…

Did you enjoy the teaser? Can you guess which of the ten authors I hosted?

6 responses to “Masquerade Ball Blog Hop Day 9: “Bottle it Up””