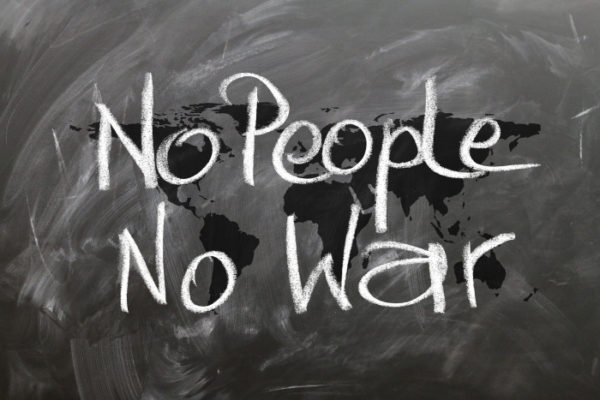 I saw this simple four-word prompt a while ago on Creative Talents Unleashed and wanted to have a go at turning it into a short story. As it’s National Writing Day, what better time to exercise my writing muscle? I typed this on my lunch break today and haven’t had much time to polish it, so please be kind!

No People, No War

“No people, no war,” he says simply, lunging for the activator. I catch his wrist just as he grabs it and squeeze it hard, causing the device to fly out of his hand and clatter to the floor. The Commander’s violet eyes grow wide at my insubordination.

“How dare you!” he snarls. I’ve never stood up to my brother like this before and for a moment I feel a flash of guilt. But then I remember that he was about to destroy a whole planet with just the touch of a button.

“I can’t let you do this,” I say, still grasping his wrist tightly. I can already see maroon bruises blossoming under his amethyst-toned skin.

“I am in command here!” he spits. He tries to twist away from me, but my grip is firm.

“No!” I shout, pushing him into the metal wall and pressing my arm hard against his collarbone, pinning him there. Outrage blazes in his eyes. I hate myself for using his physical weakness against him, but this is the only way to stop him.

“Resorting to violence as always,” he growls. “You’re just like them. I knew you were too weak for this task. I’m the only one capable of doing what needs to be done. I can end all their pain and suffering once and for all if you’ll only get out of my way”.

“End their suffering? You would end their lives! Young earthlings, innocents!” I glance towards the image of the planet earth on the obscreen beside us, a lush blue and green orb spinning slowly on its axis. I imagine the humans below, going about their daily lives in ignorance of how close they are to annihilation.

“Yes,” he says coldly. “All will perish. But the Cataclysm’s micropulse will terminate them quickly, they won’t suffer. After that, they will feel nothing…it’s a kindness, Zoriaya. The waste of potential is unfortunate,” He lowers his eyelids for a second. “But you are letting sentiment cloud your judgement, sister. This is necessary. Humans as a whole are not innocent. Those children you want to protect will grow to become the monsters we have been warned about. We cannot let them continue on this path.”

“But they don’t deserve to die!” I choke out, hot tears now pricking at my eyes. Bile rises in my throat as I picture the bright beam of energy that would send a lethal shockwave of radiation rippling across earth’s surface, frying everything in its path. I can’t believe I had any part in designing this weapon. But that was before I knew the truth.

“I know that,” He says quietly, “But this is the only way. They will not change. What have we seen over the centuries but violence and destruction? We’ve given them enough chances, Zoriaya, but time and time again they have proven they cannot live in harmony. All they are capable of is hate.”

I shake my head in frustration. “That’s not true,” I argue. “You don’t understand the humans like I do, you didn’t live among them. I have seen the truth of their hearts and I know they’re worth saving. If we can just–“

“You really have lost your mind, sister. They have you brainwashed. You were foolish to believe the pretty words of that savage.” The last word is laced with his disgust and judgement and I can’t stop my cheeks from flushing.

“It’s not about him,” I say, forcing the image of Logan’s soft, brown eyes out of my mind. “They’re good people. They dream of peace, they create wonders of the imagination that you would never believe. If you would only open your eyes, you would see how they love so deeply and fiercely, just like us. You’re right that some are fuelled by hate and greed, but most of the ordinary people are fighting for freedom and justice. They only want to protect the ones they love. They fight with hope in their hearts, not hate. What right have you to take that hope away forever?”

Mazura’s eyes narrow and he pinches his lips together. “I have every right,” he says, in a voice barely louder than a whisper. “Have you forgotten the task we were purposed with?”

“Of course I haven’t! But this is genocide you speak of. We’re not gods, Mazura.”

“We may as well be. We’re better and stronger than them. We were given this power for a reason, surely you believe that? We were never meant to save them, but to stop them. I see that now. This is the only way to create peace.”

“By destroying life? You will leave nothing but a world of dark and silence. That’s not peace, it’s emptiness.”

“That may be so, but it’s better than the chaos that reigns now. Sometimes we have to make sacrifices. No matter what we feel, we have to do what is right.”

I close my eyes for a second, letting a few tears escape and trace their way down my cheeks.

“You’re right,” I say quietly, releasing my hold on him. I can see the deep crescent marks my nails have made in his arm.

“I know this is hard,” he says softly. “I understand your pain. But this is the only way.” I nod, slowly.

Wincing slightly, he stoops down and picks up the activator. He is seconds away from destroying everything I love. But as he twists upwards, I draw Logan’s laserblade in one sweeping motion. There is a brief look of confusion on Mazura’s face, giving way to fear and fury as I slash the weapon across his chest. His purple skin pales and he crumples to the floor. I can’t look away as much as I want to. He wheezes with every shallow breath, fighting through his pain to force out his last, desperate warning: “Don’t…trust…them.”

Mazura’s once bright eyes roll back in his skull and I feel an agonising heat searing through my skin, as surely as if it the laserblade had punctured my own heart. What have I done? His wound is clean and cauterised, yet I wipe my hands on my robes as if they are dripping with my brother’s magenta blood. I reach down and gently close his eyes. He looks at peace now, I almost envy him. I wonder if I will ever know peace again.

I race to the control screen and tap in my access codes. The program that controls the Cataclysm is protected by a security system of my own design, which requests my name and rank. “Liutenant Zoriaya Einzelina” I say softly. The AI scans my retinas and voice pattern before granting me access. With shaking hands, I disable the device.

I can already hear hurried footsteps approaching; the guards must have felt Mazura’s passing. I want to grab the activator and run to the nearest escape pod, but that will only buy me time. Eventually, the Vice Commander will work out a way to use the Cataclysm without it. My only hope is to try to convince her to listen to me. But that won’t be easy when she sees what I’ve done. Still, I have to try. If I can’t convince her not to annihilate earth, I’ll have to destroy the Cataclysm device, and there’s only one way that can happen.

I glance up at the obscreen, at the tiny, primitive world that I have murdered my own brother to protect. If the Vice Commander won’t listen, I will have no choice but to sacrifice the lives of everyone aboard this ship.

“I hope you’re worth it,” I mutter, just before the Vice Commander bursts through the door, her anguished scream chilling me to the core.

What do you think of my piece of writing? Did you do anything to mark National Writing Day? Let me know in the comments!

8 responses to ““No People, No War”, a Short Story for #NationalWritingDay”