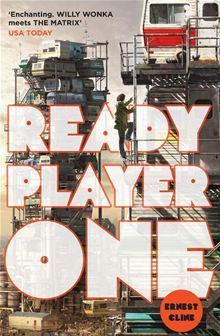 It’s the year 2044, and the real world has become an ugly place. We’re out of oil. We’ve wrecked the climate. Famine, poverty, and disease are widespread.

Like most of humanity, Wade Watts escapes this depressing reality by spending his waking hours jacked into the OASIS, a sprawling virtual utopia where you can be anything you want to be, where you can live and play and fall in love on any of ten thousand planets. And like most of humanity, Wade is obsessed by the ultimate lottery ticket that lies concealed within this alternate reality: OASIS founder James Halliday, who dies with no heir, has promised that control of the OASIS – and his massive fortune – will go to the person who can solve the riddles he has left scattered throughout his creation.

For years, millions have struggled fruitlessly to attain this prize, knowing only that the riddles are based in the culture of the late twentieth century. And then Wade stumbles onto the key to the first puzzle. Suddenly, he finds himself pitted against thousands of competitors in a desperate race to claim the ultimate prize, a chase that soon takes on terrifying real-world dimensions – and that will leave both Wade and his world profoundly changed.

Ready Player One is an entertaining and nostalgic romp through 1980s pop culture. Being born at the end of the decade, I missed the real 80s experience but I’ve always had a love of all things retro. Cline pays homage to many of my favourite movies, books and TV shows; including Star Trek, Back to the Future, Star Wars, Indiana Jones, LOTR, Blade Runner and Monty Python. All of these geeky allusions were really fun, even though some of the more obscure music and video game references were lost on me.

The story follows a teenage boy called Wade Watts and his epic quest to find an ‘easter egg’ hidden inside a virtual reality game called the Oasis. The game’s creator, James Halliday, has left his entire fortune and control of the Oasis to the first person to find the prize, which triggers a Willy Wonka style hunt, with everyone desperate to find the three keys that will lead them to the egg. To do so, they must follow Halliday’s trail of clues that are all based on his obsession with 1980s pop culture. Sounds fun, right?

It is really enjoyable and hilarious. But what I didn’t expect was that the story would take a darker turn. I don’t want to give away any spoilers, but let’s just say that the hunt for Halliday’s easter egg turns out to have serious implications in the real world.

Wade, who goes by the avatar name ‘Parzival’, is one of many ‘gunters’ that dedicate their lives to the hunt. He studies everything about Halliday’s life and interests and he spends more time logged into the Oasis than in the real world. Wade is smart and funny, but outside the Oasis he is mistreated, ignored and isolated. I can understand why he wants to escape from reality. I liked him and felt sorry for him in equal measure.

Aech was my favourite secondary character, but I really liked Shoto and Art3mis too. They were all intriguing, because we don’t know who most of them are in the real world, we only see their avatars. I wasn’t sure who Wade should trust and confide in, as they could be concealing their real identities. One of my theories turned out to be way off.

There were two things that kept me from giving Ready Player One the full five stars. One is that I thought some scenes were very rushed. The book tries to fit in so much and sometimes we don’t really get to experience the action first hand, but are just given a quick summary of it. The other is that I found Wade’s extensive knowledge, hacking abilities and the security systems available to him quite unbelievable. I expected him to make more mistakes or face more threats, but the way he lucked out at certain times just seemed too convenient.

Nevertheless, Cline’s exciting and exaggerated writing style had me hooked from the first page. Just like the Oasis, I found Ready Player One to be incredibly immersive and addictive.

I thought that it was a stand-alone, but I’ve since heard that there is actually a sequel in the works. I’m not sure how I feel about that, because although I would certainly enjoy reading more about this world, I also think that it had a satisfying ending that doesn’t need any further explanation. I still won’t be able to resist buying it, though. I also really want to see the movie now as I think the concept will translate really well to the big screen.

I’d recommend Ready Player One to all lovers of sci-fi, fantasy and geek culture. I imagine that fans of World of Warcraft style RPGs or retro arcade games would really appreciate this book, though you don’t have to be a gamer to enjoy it. If you like films like Wreck-it-Ralph, The Matrix and The Guardians of the Galaxy you will probably love this book as much as I did.

“No one in the world gets what they want and that is beautiful.”

“I created the OASIS because I never felt at home in the real world. I didn’t know how to connect with the people there. I was afraid, for all of my life, right up until I knew it was ending. That was when I realized, as terrifying and painful as reality can be, it’s also the only place where you can find true happiness. Because reality is real.”

“We’d known each other for years, in the most intimate way possible. We’d connected on a purely mental level. I understood her, trusted her, and loved her as a dear friend. None of that had changed, or could be changed by anything as inconsequential as her gender, or skin color, or sexual orientation.”

Have you read Ready Player One or seen the movie? What did you think? Are you a fan of retro games and 1980s pop culture?

6 responses to “Book Review: Ready Player One by Ernest Cline”