Disclosure: This post contains Amazon affiliate links, which means I can earn a small commission if you click on them and then make a purchase. This goes towards blog hosting and other expenses. For more information, please read the full disclosure.
Title: Rooms
Author: Lauren Oliver
Edition: UK paperback
Publisher: Hodder Paperbacks
Release date: August 2015 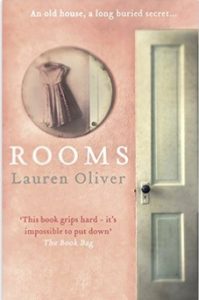 A tale of family, ghosts, secrets, and mystery, in which the lives of the living and the dead intersect in shocking, surprising, and moving ways

Wealthy Richard Walker has just died, leaving behind his country house full of rooms packed with the detritus of a lifetime. His estranged family—bitter ex-wife Caroline, troubled teenage son Trenton, and unforgiving daughter Minna—have arrived for their inheritance.

But the Walkers are not alone. Prim Alice and the cynical Sandra, long dead former residents bound to the house, linger within its claustrophobic walls. Jostling for space, memory, and supremacy, they observe the family, trading barbs and reminiscences about their past lives. Though their voices cannot be heard, Alice and Sandra speak through the house itself—in the hiss of the radiator, a creak in the stairs, the dimming of a light bulb.

The living and dead are each haunted by painful truths that will soon surface with explosive force. When a new ghost appears, and Trenton begins to communicate with her, the spirit and human worlds collide—with cataclysmic results. 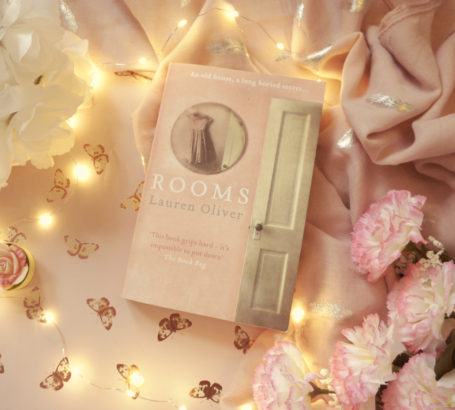 As a long-time fan of Lauren Oliver, I decided to try Rooms even though adult mystery isn’t my usual genre of choice. The supernatural element really appealed to me, but I discovered that the book is more about family drama than it is about the paranormal. It is a ghost story, but the focus is on the relationships between the characters.

The Walkers are an extremely dysfunctional family and none of them are particularly likeable. The deceased Richard Walker was a cheat and his ex-wife Caroline is an alcoholic who is barely keeping her life together. Their daughter Minna distracts herself from her problems through having as much meaningless sex as possible and Minna’s brother Trenton is a troubled teenager who is planning to commit suicide. I sympathised with Caroline and Trenton a little, but I hated Minna. She is arrogant and selfish and treats most people like dirt.

The Walkers are being watched by two ghosts, Alice and Sandra, who have inhabited the old house for years. I liked Oliver’s unique take on ghosts. Instead of being apparitions that float from room to room, the house has become their body and they have an omniscient presence, able to see and hear what is going on in all rooms of the house at all times. They can feel sensations such as someone walking across the floorboards or running up the stairs. Both ghosts are trapped and bored, having nothing to do but observe the Walker family as one might watch a TV soap opera. We see most of the action through their eyes, with flashbacks to Alice and Sandra’s pasts mixed in. It’s obvious from the start that they are both unreliable narrators and are holding things back.

There’s not much action in the book as the characters are mostly reflecting on their troubled pasts. As you can imagine, there are plenty of skeletons in the Walker family closet and the ghosts have their own dark secrets. The mysteries were intriguing and I was curious about what the characters were hiding, but the pacing was quite slow. The revelations were interesting but somewhat predictable and not the dramatic twists that I’ve come to expect from Oliver.

Rooms is primarily about the secrets that people keep and the lies that they tell to each other and to themselves. The main message seems to be that you cannot bury the past forever- “everything comes up in the end” and you have to deal with it before you can move on. By the end of the novel, the characters have all found out some unpleasant truths and it’s uncertain exactly where they will go from here. Certain moments in the last few chapters give a hint of hope for reconciliation and redemption, but you also know that the path ahead won’t be easy for any of them.

Overall, I found Rooms to be an interesting exploration of family relationships with a unique take on the paranormal. However, I think I would have enjoyed it more if the characters had been more likeable and relatable, as I would have been rooting for them more. I would recommend Rooms to anyone who enjoys reading drama or mystery. It does contain dark themes such as suicide and abuse which may be a trigger for some and is definitely recommended for adults only.

“But that’s the beauty of life: time if yours to keep and to change. Just a few minutes can be sufficient to carve a new road, a new track. Just a few minutes, and the void is kept at bay. You will live forever with that new road inside of you, stretching away to a place suggested, barely, on the horizon. For the shortest time, shorter than the shortest second’s breath, you get to stand up to infinity. But eventually, and always, infinity wins.”

“This is how we grow: not up, but out, like trees—swelling to encompass all these stories, the promises and lies and bribes and habits.”

“Parents teach us our very first lesson about love: that you sure as hell don’t get to choose it.”

“Memory is as thick as mud. It rises up, it overwhelms. It sucks you down and freezes you where you stand. Thrash and kick and gnash your teeth. There’s no escaping it.”

Have you read Rooms? What did you think?