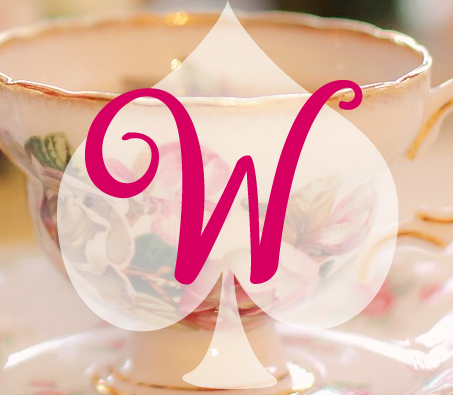 There are quite a few things I could have written about for W: Wonderland, the Walrus, the White Queen, and so on. But I decided to focus on The White Rabbit. He’s an important character because he is the very thing that leads Alice to enter Wonderland in the first place.

“So she was considering, in her own mind (as well as she could, for the hot day made her feel very sleepy and stupid), whether the pleasure of making a daisy-chain would be worth the trouble of getting up and picking the daisies, when suddenly a White Rabbit with pink eyes ran close by her.

There was nothing so very remarkable in that; nor did Alice think it so very much out of the way to hear the Rabbit say to itself “Oh dear! Oh dear! I shall be too late!” (when she thought it over afterwards it occurred to her that she ought to have wondered at this, but at the time it all seemed quite natural); but, when the Rabbit actually took a watch out of its waistcoat pocket, and looked at it, and then hurried on, Alice started to her feet, for it flashed across her mind that she had never before seen a rabbit with either a waist-coat pocket, or a watch to take out of it, and burning with curiosity, she ran across the field after it, and was just in time to see it pop down a large rabbit-hole under the hedge. “

Alice in Wonderland starts with a very ordinary scene-Alice sitting with her sister by the riverbank. She is feeling bored and drowsy and soon drifts off to sleep. Instead of blurring the boundary between reality and the dream, Carroll plunges the reader straight into the realm of fantasy through the appearance of The White Rabbit, who is oddly dressed in human clothes.

Carroll introduces both Alice and the reader to the fantastical nature of Wonderland by taking something familiar and recognisable and adding unusual details like the pocket watch, which make us intrigued. Just like Alice, we want to follow the White Rabbit and find out exactly who he is and where he is going. The phrase ‘follow the white rabbit’ is often used today to describe being led by curiosity into a world of the unknown and is often associated with mysteries conspiracy theories.

The White Rabbit’s appearance in the story always moves the plot along because Alice follows him wherever he goes, so he acts as a kind of guide through Wonderland. However, he is an elusive character that always stays one step ahead of Alice, so he could also represent frustrated desire. She hopes that if she catches him she will gain some new knowledge or understanding, but when she finally sees him again at the Knave of Hearts‘ trial, there is no spectacular reveal.

“Was he framed on the ‘Alice’ lines, or meant as a contrast? As a contrast, distinctly. For her ‘youth,’ ‘audacity,’ ‘vigour,’ and ‘swift directness of purpose,’ read ‘elderly,’ ‘timid,’ ‘feeble,’ and ‘nervously shilly-shallying,’ and you will get something of what I meant him to be. Ithink the White Rabbit should wear spectacles. I am sure his voice should quaver, and his knees quiver, and his whole air suggest a total inability to say “Bo” to a goose!”

The White Rabbit is nervous and always in a hurry. It’s possible that Alice Liddell’s father, Dean Liddell, was the inspiration for this character as he was notorious for being late for his services. Perhaps he also represents our struggle as humans-we are always rushing from one thing to the next and trying to out-run time but inevitably it catches up with us in the end.

Do you have a personal ‘white rabbit’ that inspires your curiosity and encourages you to follow?

5 responses to “W is for White Rabbit #atozchallenge”