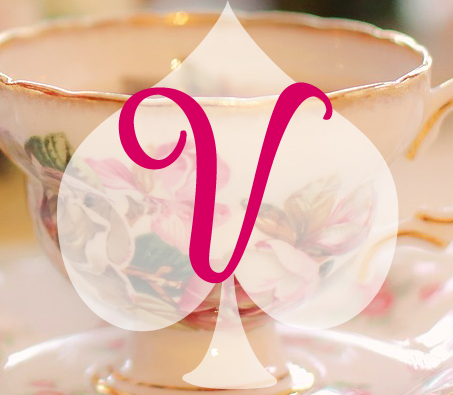 For the letter V, I’ve decided to talk about verses (poems). There are lots of verses in Alice in Wonderland and Through the Looking Glass, such as ‘The Crocodile’,’You are Old Father William’ and, of course, the famous Jabberwocky.

Verse was a popular form of writing in the nonsense genre. Verses were usually whimsical and humorous and almost always rhymed. To create humour, Carroll used traditional grammar and syntax but filled his verses with made-up words, puns and homophones (words that sound the same but have different meanings).

In Victorian times it was common for children to read poems and nursery rhymes over and over again at school to learn them by heart. These verses were usually either to help children remember facts or to teach them a moral lesson. Many of the poems in Alice in Wonderland are parodies of these familiar rhymes, with similar metre and style. For example, Alice recites: “How doth the little crocodile improve his shining tail,” which sounds a lot like the opening lines of “Against Idleness and Mischief” by Isaac Watts:

How doth the little busy bee
Improve each shining hour

The Duchess sings to the pig/baby: “Speak roughly to your little boy
And beat him when he sneezes,” which is a parody of “Speak Gently” by G.W Langford or David Bates, and the Hatter’s song “Twinkle, twinkle, little bat,” needs no explanation. This would have been amusing to Victorian readers who knew the original verses.

If you’d like to find out more about Carroll’s verses, I recommend you read “Poem Origins: Alice’s Adventures in Wonderland”.

Do you have a favourite verse by Lewis Carroll?

5 responses to “V is for Verse #atozchallenge”