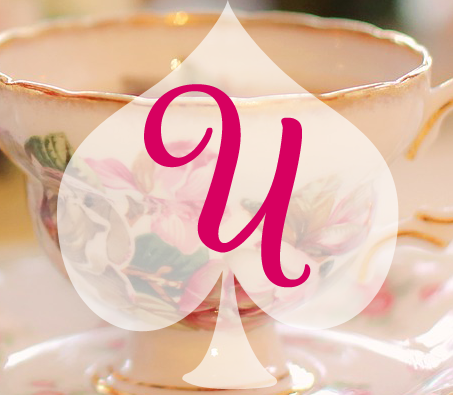 For the letter U, I’m discussing the upside-down nature of many things that Alice encounters and also briefly looking at ‘Un-birthdays’.

As I’ve mentioned before in my post about Mirrors and Madness, Carroll loves turning conventional ideas upside-down and he frequently inverts the rules of language and logic. There are also many references throughout both books to characters or objects being upside-down, below are a couple of examples.

Humpty Dumpty took the book, and looked at it carefully. `That seems to be done right — ‘ he began.

“I wonder if I shall fall right through the earth! How funny it’ll seem to come out among the people that walk with their heads downwards! The Antipathies, I think . . . “

When Alice falls through the rabbit-hole into Wonderland, her reality completely changes, but she still tries to deal with the characters and situations she encounters with the strategies and logic of the world above-ground. Yet the boundaries she is familiar with are constantly broken and she soon discovers that Wonderland has no reliable rules. Animals can talk, playing cards can come to life and trials can start with the verdict before the evidence has been heard. She can’t even count on time or her own size to be consistent.

While she is falling, Alice imagines the rabbit hole goes all the way through the earth to the other side, where people exist upside down. She mistakenly uses the word “antipathies”, which means aversions or oppositions, when she means antipodes (Australia and New Zealand). This introduces us to the inversion of language that carries on through the rest of the book and also hints at what Alice is about to discover-characters and situations that will provoke a feeling of antipathy (intense dislike or hostility) and which will be a reversal of everything she expects.

In Through the Looking Glass, Humpty Dumpty is wearing a cravat that he says was given to him as an ‘un-birthday present’.

`They gave it me,’ Humpty Dumpty continued thoughtfully, as he crossed one knee over the other and clasped his hands round it, `they gave it me — for an un-birthday present.’

`I beg your pardon?’ Alice said with a puzzled air.

`I mean, what is and un-birthday present?’

`A present given when it isn’t your birthday, of course.’

Humpty Dumpty explains that un-birthdays are much better than regular birthdays because there are 364 of them, compared to only one birthday. You can’t fault that logic!

Is it your un-birthday today? If so, how are you celebrating? I think I will have an upside-down cake 🙂