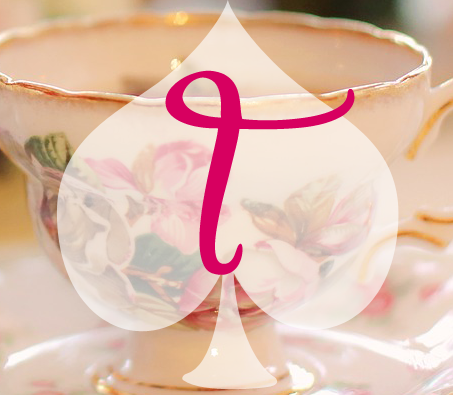 For the letter T, I’m going to take a look at the famous mad tea party and also discuss the theme of time in Carroll’s work.

In the chapter “A Mad Tea-Party” in Alice’s Adventures in Wonderland, Alice meets the Hatter, March Hare and Dormouse who are forced to repeat tea time over and over again as time has stopped. They share many stories and riddles that confuse her and are also quite insulting. Eventually, Alice becomes tired of their nonsense and walks out.

`And ever since that,’ the Hatter went on in a mournful tone, `he won’t do a thing I ask! It’s always six o’clock now.’

A bright idea came into Alice’s head. `Is that the reason so many tea-things are put out here?’ she asked.

`Yes, that’s it,’ said the Hatter with a sigh: `it’s always tea-time, and we’ve no time to wash the things between whiles.’

`At any rate I’ll never go THERE again!’ said Alice as she picked her way through the wood. `It’s the stupidest tea-party I ever was at in all my life!’

Symbolism Behind the Tea Party

The drinking of tea was (and still is) a large part of British culture and the tea trade is linked to the growth of the British Empire. In the rest of Europe, tea was an upper-class drink, but it became available to all social classes in Great Britain. However, tea parties were still mainly the preserve of wealthy families, who used to send their servants outside the room until they were called upon.

Afternoon tea was an intimate and ritualistic gathering, usually in the sitting room. It was normally a formal and civilised occasion where people used their finest china and decorated the table with matching cloth napkins, cups and plates. They would serve a selection of luxury foods that many working-class families at the time would not be able to afford: delicate sandwiches, cakes, buns, biscuits and scones.

Of course, Carroll turns all of this on its head and makes his tea party into a ridiculous affair, where the usual rules of etiquette and formality do not apply. As I’ve mentioned before, the Hatter possibly represents the poor treatment and working conditions of the lower classes. It seems that Carroll was satirising the Victorian class system and its social conventions.

The Hatter explains that they have no time to wash the tea things so they just keep moving around to a new place as the things get used up. Alice asks: `But what happens when you come to the beginning again?’ and the Hatter rudely asks that they change the subject. The changing of places turns the tea party into an absurd game of musical chairs. Carroll seems to be poking fun at the trivial nature of the social hierarchy and how unstable one’s position could be. You might reach the top of the social ladder and then end up right back where you started again, with someone else’s dirty pots to wash before you can have your own tea.

The Hatter explains to Alice that they are forced to have tea all day because Time has punished him by standing still at 6 pm, so it is forever tea time. In Wonderland time is not an abstract concept, but a personified being who has feelings and Hatter explains he can be influenced to be nice to you or to punish you, depending on your treatment of him. The tea party not only inverts all the social conventions Alice is used to, but it also turns what she knows about the order and science of the universe upside down. This is later reinforced in Through the Looking Glass, in which time sometimes runs backwards or in the wrong order.

`If you knew Time as well as I do,’ said the Hatter, `you wouldn’t talk about wasting IT. It’s HIM.’

`I don’t know what you mean,’ said Alice.

`Of course you don’t!’ the Hatter said, tossing his head contemptuously. `I dare say you never even spoke to Time!’

`Perhaps not,’ Alice cautiously replied: `but I know I have to beat time when I learn music.’

`Ah! that accounts for it,’ said the Hatter. `He won’t stand beating. Now, if you only kept on good terms with him, he’d do almost anything you liked with the clock. For instance, suppose it were nine o’clock in the morning, just time to begin lessons: you’d only have to whisper a hint to Time, and round goes the clock in a twinkling! Half-past one, time for dinner!’

Have you ever been to a tea party? How do you like your tea?

3 responses to “T is for Time for Tea #atozchallenge”