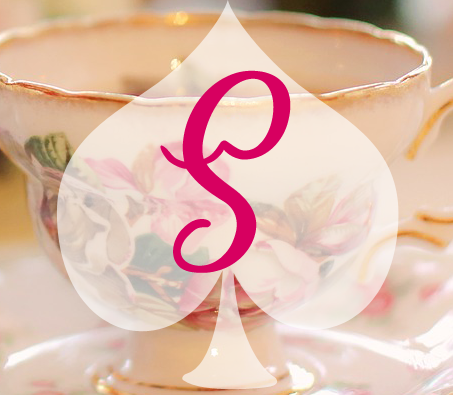 For the letter S, I’ve decided to talk about all the stretching and shrinking that Alice goes through in Alice in Wonderland. The various food and drinks that Alice tastes, such as the “Eat me” cakes, cause her to either grow larger or shrink to a tiny size.

“‘Now I’m opening out like the largest telescope that ever was! Good-bye, feet!’ (for when she looked down at her feet, they seemed to be almost out of sight, they were getting so far off). `Oh, my poor little feet, I wonder who will put on your shoes and stockings for you now, dears? I’m sure _I_ shan’t be able! I shall be a great deal too far off to trouble myself about you: you must manage the best way you can; –but I must be kind to them,’ thought Alice, `or perhaps they won’t walk the way I want to go! Let me see: I’ll give them a new pair of boots every Christmas.’”

`I know SOMETHING interesting is sure to happen,’ she said to herself, `whenever I eat or drink anything; so I’ll just see what this bottle does. I do hope it’ll make me grow large again, for really I’m quite tired of being such a tiny little thing!’

It did so indeed, and much sooner than she had expected: before she had drunk half the bottle, she found her head pressing against the ceiling, and had to stoop to save her neck from being broken. She hastily put down the bottle, saying to herself `That’s quite enough–I hope I shan’t grow any more–As it is, I can’t get out at the door–I do wish I hadn’t drunk quite so much!’

There are a few different possibilities as to what the stretching and shrinking signify. One theory is that the physical changes that Alice goes through symbolise how she is growing up, both physically and mentally. In Wonderland she never seems to be the right size and feels upset and frustrated when she can’t enter the garden. She is “too big” for some childish things now, but “too small” to fully understand or have access to the adult world. The confusing and traumatic changes she goes through could represent either the physical changes of puberty or the loss of childhood innocence as she learns about difficult topics such as death, relationships and the class system.

The stretching and shrinking confuses Alice and causes doubt about her identity. After she eats from the Caterpillar’s mushroom, the pigeon mistakes her for a serpent because of her long neck and although Alice is asked to identify herself by many different characters, she struggles to give a straight answer and confesses that she doesn’t know who she is anymore. Yet, at the trial, Alice grows in size once more and she also seems to have grown in confidence as she is able to stand up to the Queen of Hearts. So the changes in Alice’s physical size seem to be closely linked to how self-assured she feels.

In ‘How little girls are like serpents, or, food and power in Lewis Carroll’s Alice books’, Katja Jylkka suggests that the stretching and shrinking is linked to class and power. He describes how after she eats the cake in the White Rabbit’s house, she becomes a symbol for the division between the upper and lower classes.

“Eating, in this case, has transformed Alice’s body into a succinct illustration of the Victorian social spectrum as a whole, her head representative of the upper class and her feet of the lower. Supporting this identification is the physical distance between Alice’s head and feet, as well as her patronizing attitude toward the labouring, lowest “members” of her body and the service they provide her.” […]

“Whenever Alice grows larger, she sees Wonderland from an upper-class point of view. When she is that large, her naturally greater physical power over the animals of Wonderland and the great literal and metaphorical distance that separates Alice from them leads to difficulties in understanding the plight of lower-class figures and inclines her to be more abusive to them, just as other upper-class figures are throughout the text.”

Lewis Carroll suffered from a rare neurological disorder that causes strange hallucinations and affects the size of visual objects, making them appear bigger or smaller than they actually are. The disease was later named ‘Alice in Wonderland Syndrome’.

What do you think all the stretching and shrinking in Alice in Wonderland represents?

3 responses to “S is for Stretching and Shrinking #atozchallenge”