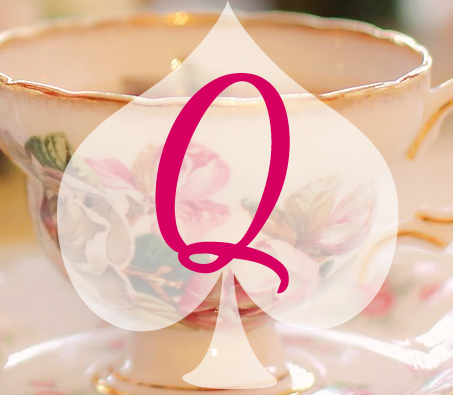 Q is normally a tricky letter, but today’s choice was obvious, it has to be the infamous Queen of Hearts, one of the most iconic literary characters.

The Queen of Hearts is one of the playing card characters that Alice meets on her first adventure. She rules Wonderland as a tyrant and even the King is submissive to her. She is irrational, impatient and bad-tempered. When she loses her temper with her subjects, which is often, she commands that they are immediately executed with the famous line: “off with their heads!” Carroll described her as “a sort of embodiment of ungovernable passion – a blind and aimless Fury.”

“The players all played at once without waiting for turns, quarrelling all the while, and fighting for the hedgehogs; and in a very short time the Queen was in a furious passion, and went stamping about, and shouting `Off with his head!’ or `Off with her head!’ about once in a minute.”

“The Queen had only one way of settling all difficulties, great or small. `Off with his head!’ she said, without even looking round.”

The Queen of Hearts is a good example of what happens when power gets into the wrong hands. Instead of ruling wisely and fairly, she rules with fear and threats, so everyone eventually bends to her will. Some believe that she is a caricature of Queen Victoria, but although Victoria was strong-willed she was also very proper and dignified, so I think it’s unlikely that Carroll intended that.

The Queen of Hearts playing card is said to be based on the biblical figure, Judith. In the Book of Judith, a daring and beautiful widow uses her charm to become an intimate friend of the Assyrian general, leader of her enemies. After gaining his trust, she finally beheads him and takes his head back to the Israelites, who then attack the Assyrians. I find it interesting that Judith’s method of murder was decapitation.

The Queen is an obstacle that Alice must face in order to figure out the puzzle of Wonderland and she ‘defeats’ her by recognising her for what she is: a playing card. Alice also discovers that the Queen’s threats of execution are never actually carried out because the prisoners are being quietly pardoned by the King. Alice is the only one to stand up to her, showing that through her adventure she has become more self-assured and will no longer allow herself to be bossed around by people who make no sense. The Queen could also represent childishness, (as she is impatient, over-sensitive and prone to temper tantrums) and Alice’s dismissal of her shows her increasing maturity.

I was always fond of the Queen of Hearts and found the Disney animated version really amusing. What do you think of her?

« Book Review: Strange the Dreamer by Laini Taylor
R is for Riddles and Ravens #atozchallenge »

5 responses to “Q is for Queen of Hearts #atozchallenge”