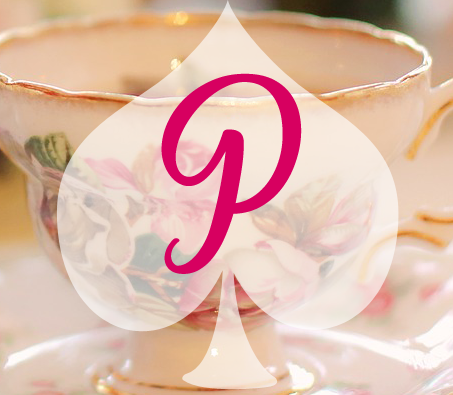 For the letter P, I’m going to talk about playing cards, which I already briefly mentioned in my post about games. The playing cards are characters from Alice’s Adventures in Wonderland who have human heads and limbs but their torsos look like cards. They include the Queen of Hearts, King and Knave of Hearts, as well as servants and royal guards. It is explained that the spades are gardeners, clubs are soldiers, diamonds are courtiers, and hearts are members of the royal family.

Alice first meets three cards (the 2, 5 and 7 of Spades) while they are in the Queen’s garden painting white roses red. They explain that the Queen of Hearts hates roses and they are trying to cover up their mistake before she decides to behead them. Unfortunately, the Queen discovers the white roses and orders them to be executed. The card soldiers also act as arches in the strange game of croquet that Alice and the Queen play. They later appear at the Knave of Hearts’ trial.

“First came ten soldiers carrying clubs; these were all shaped like the three gardeners, oblong and flat, with their hands and feet at the corners: next the ten courtiers; these were ornamented all over with diamonds, and walked two and two, as the soldiers did. After these came the royal children; there were ten of them, and the little dears came jumping merrily along hand in hand, in couples: they were all ornamented with hearts.”

“`Who cares for you?’ said Alice, (she had grown to her full size by this time.) `You’re nothing but a pack of cards!’

At this the whole pack rose up into the air, and came flying down upon her: she gave a little scream, half of fright and half of anger, and tried to beat them off, and found herself lying on the bank, with her head in the lap of her sister, who was gently brushing away some dead leaves that had fluttered down from the trees upon her face.”

People in Victorian times played a wide variety of card games, and Whist was especially popular. Playing cards have obvious associations with leisure, competition, gambling, magic and trickery. The four suits have evolved from symbolism linked to astronomy, alchemy, history and mysticism. Here are some of the things they are said to represent:

In Alice in Wonderland, the main suit that we see is Hearts. As we will see tomorrow, the Queen of Hearts’ personality is completely opposite to what Hearts normally represents-she is anything but loving!

I think Carroll included playing cards in the book because these unusual characters are just like the kind of things we all dream about from time to time-inanimate objects coming to life in a strange mix of the mundane and the fantastical. Apart from the royal characters, who appear to be more three-dimensional, most of the playing cards have numbers instead of names. They are background characters who are all very similar-literally “cardboard-cutouts”! Making several of the characters into playing cards allowed Carroll to hint about the illusory nature of Wonderland and to reveal their triviality and the final chapter.

At the trial, Alice is beginning to understand that the characters of Wonderland may not really be a threat to her. The Queen shows herself to be irrational and blood-thirsty, wanting to sentence the Knave of Hearts before his guilt or innocence has even been established and Alice realises that the whole trial is a sham. The Queen threatens Alice and tries to control her, but Alice has grown both in size and confidence and she finally recognises the characters for what they are-“nothing but a pack of cards!” She has risen above their trivial nonsense (both literally and figuratively) and she refuses to play their game.

The house of cards then collapses and begins tumbling down over Alice’s head and the illusion of them as real people with power over Alice is shattered. Alice wakes to discover that the playing cards were just leaves falling on her face after all and that there is no need to be scared.

Do you play cards or know any card tricks?

« O is for Oysters #atozchallenge
Book Review: Strange the Dreamer by Laini Taylor »

6 responses to “P is for Playing Cards #atozchallenge”