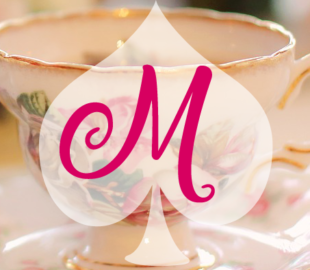 For the letter M I had so many characters, themes and motifs to choose from (the March Hare, mathematics, mushroom, etc.) but I finally decided to focus on the motifs of mirrors and madness.

Mirrors in Through the Looking Glass

In Through the Looking-Glass, Alice steps through a mirror and enters a fantasy world which functions like a mirror-image of reality, with many things reversed or inverted. For instance, books are written in mirror-writing and time occasionally works backwards. In order to get away from the Looking-Glass House, Alice has to walk towards it, and she and the Red Queen have to run in order to stand still. These inconsistent episodes show that we are in the realm of parody and that Carroll is making satirical observations about the real world.

The looking-glass world also acts like a mirror-image of Wonderland, as it’s set in the opposite season and time of day and, whereas the first book uses the imagery of playing cards and frequent changes in Alice’s size, the second book uses the imagery of chess and frequent changes in time and direction. There are many other examples of mirror images used throughout the book, such as the twins Tweedledum and Tweedledee. Of course, the whole story takes place within a dream, which is itself a kind of reflection of the real world, created by the subconscious.

Carroll liked to write letters in mirror-writing, drew pictures which changed into different ones when held upside down, and he also liked to play his musical boxes backwards. Some people think that this has something to do with him being left-handed!

Madness in Alice in Wonderland

When Alice first encounters The Cheshire Cat, he warns her that everyone in Wonderland is mad.

`But I don’t want to go among mad people,’ Alice remarked.

As I’ve touched on in earlier posts, the characters in Alice in Wonderland are strange, but not necessarily ‘mad’ in the sense of being insane. The Cheshire Cat tells Alice that he must be mad because he acts in the opposite way to a dog, and dogs are not mad. But obviously he is not a dog, so why should he be expected to act like one? Carroll seems to imply that madness is simply acting in unconventional ways, different to those around you. You can be accused of being mad just for acting in accordance with your own nature if it goes against the status quo.

The Hatter is usually most associated with madness, but is he really mad? He uses clever wordplay and makes interesting points, albeit in an unorthodox manner. Wit and abstract philosophy can seem like madness to a child who doesn’t understand them.

The fantasy world of Wonderland encourages us to reject conformity and embrace eccentricity. Perhaps Carroll is suggesting that even in the real world, we are all ‘mad’ in our own way.

What are your thoughts about the mirror imagery in Through the Looking Glass? Do you think the characters of Wonderland are really mad or just eccentric?

3 responses to “M is for Mirrors and Madness #atozchallenge”