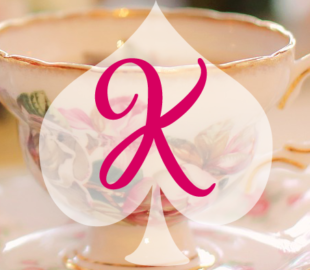 For the letter K, I’m looking into two of the minor characters from Alice in Wonderland, the King and Knave of Hearts.

The King of Hearts acts as a judge during the trial in which the Knave of Hearts is accused of stealing some tarts (like the popular nursery rhyme).

`Give your evidence,’ said the King; `and don’t be nervous, or I’ll have you executed on the spot.’

`Please your Majesty,’ said the Knave, `I didn’t write it, and they can’t prove I did: there’s no name signed at the end.’

`If you didn’t sign it,’ said the King, `that only makes the matter worse. You MUST have meant some mischief, or else you’d have signed your name like an honest man.’

There was a general clapping of hands at this: it was the first really clever thing the King had said that day.

Like the Queen of Hearts, the King is stubborn and quick to anger, but he is a slightly more sympathetic character. When the Queen wants to behead Alice, he reminds her that she is only a child and he also quietly pardons many of the prisoners when the Queen isn’t looking. However, during the trial, he shows himself to be completely incompetent and irrational. He asks for the jurors to give their verdict before hearing the evidence, asks irrelevant questions and bullies the witnesses. He is another example of how childish and illogical the world of Wonderland can be.

Alice trusts in the sanctity of law and hopes that she’ll find logic and order in the courtroom. She is desperately looking for truth and meaning after her confusing adventures. However, she quickly realises that the trial is a sham and that no sanity is to be found in Wonderland. Perhaps Carroll intended to mock the real world legal process and was making a point about how core issues of morality and justice can be drowned out by trivialities. Some critics have said that it is the law itself, rather than the Knave, that is actually on trial in this scene. The law is ‘found guilty’ because it fails to determine whether the Knave is to blame or not.

Playing cards historically carry symbolic meanings and the King of Hearts is also sometimes known as “the suicide king”, due to him appearing to put a sword through his head. He is said to be based on Charlemagne (Charles the Great).

The Knave in a pack of cards is now usually known as the Jack. It is the lowest court card and often represents a minimum standard. A Knave was a male servant of royalty, but also means a dishonest man or a rogue. In the Paris pattern, the Knave of Hearts is said to be based on La Hire, a French warrior, whose name remains a term used to describe someone who is bad-tempered or irritable.

Carroll would have been aware of these associations, but it’s unlikely that he intended the King and Knave of Hearts to carry a deep meaning. It seems that they are both just strange characters who add to the absurdity of Wonderland, showing that even the rulers and courtiers are nonsensical.

Who do you think stole the tarts? Do you think the King and Knave of Hearts represent anything specific?