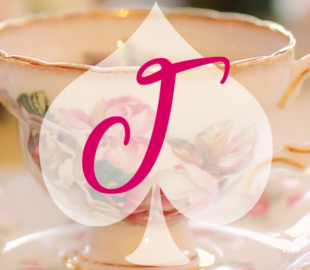 For the letter J, I’m looking at Caroll’s famous fantasy monster, the Jabberwock. This frightening creature is the subject of the verse “Jabberwocky” from Through the Looking-Glass and What Alice Found There. It tells the story of a brave man who hunts and slays the Jabberwock. Below is the full poem for your enjoyment:

Twas brillig, and the slithy toves
Did gyre and gimble in the wabe;
All mimsy were the borogoves,
And the mome raths outgrabe.

“Beware the Jabberwock, my son!
The jaws that bite, the claws that catch!
Beware the Jubjub bird, and shun
The frumious Bandersnatch!”

He took his vorpal sword in hand:
Long time the manxome foe he sought —
So rested he by the Tumtum tree,
And stood awhile in thought.

And as in uffish thought he stood,
The Jabberwock, with eyes of flame,
Came whiffling through the tulgey wood,
And burbled as it came!

One, two! One, two! And through and through
The vorpal blade went snicker-snack!
He left it dead, and with its head
He went galumphing back.

“And hast thou slain the Jabberwock?
Come to my arms, my beamish boy!
O frabjous day! Callooh! Callay!”
He chortled in his joy.

‘Twas brillig, and the slithy toves
Did gyre and gimble in the wabe;
All mimsy were the borogoves,
And the mome raths outgrabe.

I have always loved this poem! I like the way it includes so many nonsense words that remind you of real words so that you can guess at the meaning. Carroll cleverly chose words with vowel and consonant combinations that would appear to be genuine English and would be easy to pronounce. Words like “burbled”, “snicker-snack”, “galumphing” and “chortled” are also examples of onomatopoeia-when spoken aloud, they sound like what they represent.

The poem includes a lot of “portmanteaus”, or words that are a combination of two or more real words. The character Humpty Dumpty explains to Alice what some of the words mean.

“That’s enough to begin with,” Humpty Dumpty interrupted: “there are plenty of hard words there. ‘Brillig’ means four o’ clock in the afternoon–the time when you begin broiling things for dinner.”
“That’ll do very well,” said Alice: “and ‘slithy’?”
“Well, ‘slithy’ means ‘lithe and slimy,’ ‘Lithe’ is the same as ‘active.’ You see it’s like a portmanteau–there are two meanings packed up into one word.”

If you’re interested in knowing all the word meanings, you can read the full passage here.

For me, part of the fun of the poem is that the meaning isn’t obvious, so we can make up our own interpretation. When I read the first verse, it always conjures up an image of eels writhing about in a murky river, but your picture may be completely different.

I’ll be discussing Carroll’s use of language and multiple meanings in more detail later in the month.

Do you find it easy to understand the poem “Jabberwock”? What do some of the words and phrases make you think of?

5 responses to “J is for Jabberwock #atozchallenge”