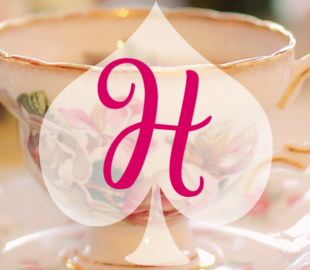 For the letter H, unsurprisingly I’m focusing on perhaps the most famous Wonderland character of all, the Hatter.

The Hatter is one of the members of the mad tea party in Alice in Wonderland. The Hatter and the March Hare are forever stuck at 6:00 pm ever since they sang for the Queen of Hearts and she sentenced Hatter to death for ‘murdering the time’. Luckily, Hatter escaped decapitation but is doomed to an eternity of teatimes.

The Cheshire Cat warns Alice that the Hatter and March Hare are “both mad”. When Alice arrives at the tea party, the Hatter addresses her in quite a rude manner, asks her unanswerable riddles, recites nonsense poetry and demands that they keep switching places at the table, like a game of musical chairs. Eventually, Alice gets fed up with this and storms off.

Later, he appears as a witness at the Knave of Heart’s trial, where he is extremely nervous because the Queen seems to recognise him as the singer she sentenced to death. The Hatter also reappears briefly in Through the Looking-Glass in the form of the Anglo-Saxon messenger ‘Hatta’.

‘Your hair wants cutting,’ said the Hatter. He had been looking at Alice for some time with great curiosity, and this was his first speech.

`You should learn not to make personal remarks,’ Alice said with some severity; `it’s very rude.’

The Hatter opened his eyes very wide on hearing this; but all he SAID was, `Why is a raven like a writing-desk?’

`I’ve had nothing yet,’ Alice replied in an offended tone, `so I can’t take more.’

`You mean you can’t take LESS,’ said the Hatter: `it’s very easy to take MORE than nothing.’

`Nobody asked YOUR opinion,’ said Alice.

The Hatter mainly seems to symbolise madness (or the perception of madness) and actually has quite a sad contextual background. Even though the Hatter is described as being mad, Carroll never actually used the term “Mad Hatter”. However, the phrase predates Alice in Wonderland and was a common phrase at the time. Hat making was the main trade in Carroll’s hometown of Stockport and many hatters contracted mercury poisoning, which causes neurological symptoms such as confusion, slurred speech, memory loss and tremors.

Sadly, many Victorian textile workers died from mercury poisoning or contracted illnesses of the nervous system and were sent to lunatic asylums. This seems to fit with the suggestion by some critics that Alice in Wonderland was a satire on the 19th-century British social system. The Hatter, like Bill the Lizard, could represent the environmental dangers that British workers faced.

I’ll be coming back to Hatter later in the month when I look at language, madness, riddles and tea parties.

Did you know about the depressing origin of the phrase ‘mad as a hatter’?

15 responses to “H is for Hatter #atozchallenge”