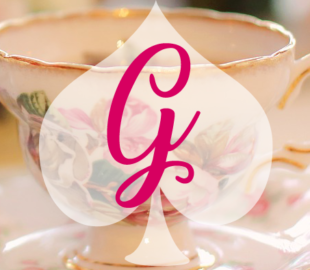 For the letter G, I’m looking at the many references to Games in Caroll’s works. Alice in Wonderland includes references to playing cards and croquet and Through the Looking-Glass alludes to the games of chess.

Alice thought she had never seen such a curious croquet-ground in her life; it was all ridges and furrows; the balls were live hedgehogs, the mallets live flamingoes, and the soldiers had to double themselves up and to stand on their hands and feet, to make the arches.

`Here are the Red King and the Red Queen,’ Alice said (in a whisper, for fear of frightening them), `and there are the White King and the White Queen sitting on the edge of the shovel — and here are two castles walking arm in arm — I don’t think they can hear me,’ she went on, as she put her head closer down, `and I’m nearly sure they can’t see me. I feel somehow as if I were invisible — ‘

“… her heart began to beat in excitement as she went on. ‘It’s a great huge game of chess that’s being played  – all over the world – if this IS the world at all, you know. Oh, what fun it is! How I WISH I was one of them! I wouldn’t mind being a Pawn, if only I might join – though of course I should LIKE to be a Queen, best.’

In Alice in Wonderland, the game of croquet is probably there to show how unjust the Queen of Hearts is. The game’s rules make no sense and the queen changes them as she feels, which guarantees her victory. Alice knows that she has no chance of winning a game under such corrupt circumstances. Perhaps this represents her frustration at not being able to understand the adult world and how it works yet. Just when she thinks she has grasped the rules, they change.

The use of hedgehogs as balls and flamingos as croquet mallets also subverts the normal world order. In Alice’s world, she is used to humans being the most important, followed by animals and then inanimate objects. But in Wonderland, objects such as playing cards can order people and animals about and use living creatures as objects or tools.

Alice also meets several talking playing cards with arms and legs. It is explained in the book that the spades are gardeners, clubs are soldiers, diamonds are courtiers, and hearts are members of the royal family. I’ll be discussing the symbolism of playing cards in more detail for letter P.

By the time we get to Through the Looking-Glass, Alice has grown up a little and has a better grasp of logic. The whole book is one big chess allegory, with Alice playing the role of white pawn. She meets several chess pieces who have come to life, such as the Red Queen (not to be confused with the Queen of Hearts) who tells her that the entire countryside is laid out in squares, like a huge chess board. She offers to make Alice into a White Queen if she can move all the way from the second rank to the eighth rank. Alice eventually manages this, is crowned queen and later grabs the Red Queen and shakes her-thereby ‘capturing’ her. She inadvertently puts the Red King into checkmate and wins the game before waking up from her dream.

The story is based on a real rule in chess in which a pawn can become ‘queened’ if it reaches the opposite end of the board. Pawns are thought of as expendable, but when queened, they become the most powerful piece on the board, able to move in any direction. Perhaps Carroll’s message was that we shouldn’t underestimate ordinary people, because if they work hard enough they can achieve great things. It could also be a metaphor for how one can move up and down the social hierarchy with clever, considered strategy.

Do you enjoy playing chess, croquet or cards?

11 responses to “G is for Games #atozchallenge”