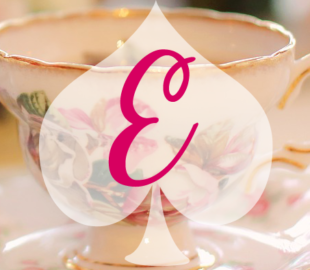 For the letter E, I’m talking about the food and drink in Wonderland that was labelled with the message “eat me” or “drink me” and what this represents.

“However, this bottle was NOT marked `poison,’ so Alice ventured to taste it, and finding it very nice, (it had, in fact, a sort of mixed flavour of cherry-tart, custard, pine-apple, roast turkey, toffee, and hot buttered toast,) she very soon finished it off.”

“Soon her eye fell on a little glass box that was lying under the table: she opened it, and found in it a very small cake, on which the words `EAT ME’ were beautifully marked in currants. `Well, I’ll eat it,’ said Alice, `and if it makes me grow larger, I can reach the key; and if it makes me grow smaller, I can creep under the door; so either way I’ll get into the garden, and I don’t care which happens!’”

The readiness with which Alice follows the instructions on the bottles and cakes she encounters shows her reckless nature and naivety about the dangers of the world. Although she wonders whether the first bottle might contain poison, she drinks it anyway, because it doesn’t say ‘poison’ on the label! Even after being told the story of the curious oysters and their horrible fate, Alice still eats the “eat me” cookie without hesitation, showing she hasn’t learned the lesson yet. She is still too young and easily tempted by her desires to realise that people might have hidden motives and that her curiosity could lead her into trouble.

Just like The Caterpillar’s mushroom, the ‘drink me’ liquids and ‘eat me’ cakes cause Alice to either shrink or grow in size, often confusing and frustrating her. This could symbolise the way Alice is trying to adapt to the dizzying changes and her rapid growth in real life (both physically and mentally) and the way in which sometimes she feels tiny compared to adults and the ‘big wide world’ around her. It’s also been suggested by some critics that these mysterious items of food and drink also represent the temptation of psychedelic drugs.

Beautiful ‘Eat Me’ Cakes You Can Make Yourself!

On Pinterest, there are many examples of beautifully decorated ‘eat me’ cakes that you can make for Alice in Wonderland themed parties. Below is one of my favourite examples, by Susan from Diamonds for Dessert. You can find the recipe and tutorial for decorating them here.

Would you eat a cake or cookie labelled “eat me” or would you think twice?

« #IWSG April 2018: Writing Through the Storm
F is for Flowers #atozchallenge »

14 responses to “E is for “Eat Me” #atozchallenge”