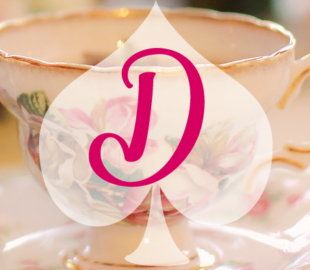 For the letter D, I’m looking into the symbolism of dreams in Caroll’s works.

At the beginning of Alice’s Adventures in Wonderland, Alice is lying by a riverbank with her sister. She later wakes in the same spot, realising that the whole adventure had been a bizarre dream. The events in Through the Looking Glass are also a dream, but Alice wonders whether it was the Red King who dreamt it or herself. Both books raise questions about the nature of reality and dreams and the link between them.

`Oh, I’ve had such a curious dream!’ said Alice, and she told her sister, as well as she could remember them, all these strange Adventures of hers that you have just been reading about; and when she had finished, her sister kissed her, and said, `It WAS a curious dream, dear, certainly: but now run in to your tea; it’s getting late.’ So Alice got up and ran off, thinking while she ran, as well she might, what a wonderful dream it had been. (~Alice’s Adventures in Wonderland, Chapter 12).

‘Now, Kitty, let’s consider who it was that dreamed it all. This is a serious question, my dear, and you should not go on licking your paw like that — as if Dinah hadn’t washed you this morning! You see, Kitty, it must have been either me or the Red King. He was part of my dream, of course — but then I was part of his dream, too!’ (~Through the Looking Glass, Chapter 12).

I absolutely adore the ending of Alice’s Adventures in Wonderland. Alice describes her strange dream to her sister, who sends her off for her tea and then has a little daydream of her own. She pictures all the creatures of Wonderland that Alice told her about and then imagines Alice all grown up and telling stories to her own children. It’s a beautiful passage and you can really feel the love that Alice’s sister has for her and the nostalgic way she feels about her own childhood. You can read the full ending here. The message that I get from this is that as we grow older, we should try to keep our childhood imagination, ‘the simple and loving heart of [our] childhood’, which can still be a source of inspiration and pleasure.

Carroll’s works seem to be influenced by the work of existential philosophers. Tweedledum and Tweedledee tell Alice that the sleeping Red King is dreaming about her and Alice claims that she is not just a figment of his imagination, but how can she prove it? This provokes us to think about whether we do really exist in the universe or merely in imagination. Are we really made of matter, or just ‘mind’? Like Alice, all of us are seeking meaning in the universe, but perhaps reality is just as meaningless and nonsensical as Wonderland.

As we know from psychologists like Freud and Jung, dreams are a window to a person’s subconscious. The images and symbols that appear in our dreams are products of our deepest fears and desires, mixed with random half-noticed things from our regular life. Alice’s dreams seem to show her fear of being powerless against authority (the Queen of Hearts) and her wish to understand and master the strange adult world with all its secrets (keys and locks) and codes (riddles and wordplay).

Some of the ridiculous features of Wonderland (like the caucus race) are parodies of the real world and its meaningless pursuits, unjust rules and corrupt leaders. Alice’s dreams are a safe place where she can explore some of the more cruel and sinister aspects of adult reality without coming to harm.

If you explore the many articles dedicated to the hidden meanings in Carroll’s works, you can fall down a bottomless rabbit hole of interesting theories!

Do your own dreams feature fantastical creatures and talking animals or are they more mundane? Let me know in the comments!

8 responses to “D is for Dreams #atozchallenge”