Hope you’re all having a relaxing Saturday. To kick off this weekend, I’m taking part in the blog tour for Fate of the Stars, a YA science fiction novel by Arwen Paris which was released on September 1st.

Keep reading to see the synopsis, read my review and enter the giveaway for the chance to win an Apple iPad mini 4! 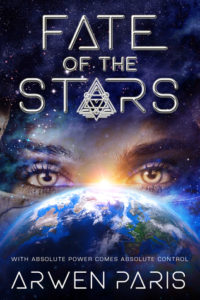 When the fate of the world rests upon you…

Allison Delaney wants to spend her senior year healing from the loss of her father, to leave the shadows of his death and her junior year break-down behind. A Labor Day beach party seems like a good place to start…but there’s more danger lurking than anyone could imagine. Death is coming to Earth if the pods of infectious creatures aren’t stopped. But only one human can help…

To live or die is no longer a choice.

Eenoki is a protector of life but must have a sentient host to fight the invasion. A teenage girl would not be the best choice, but out of desperation Eenoki invades Allison’s mind and body, granting her unnatural abilities and strengths – and helping her escape certain death when the first wave of pods land.

As destruction rains down on Earth’s population, Allison realizes to save everyone, she must make the ultimate choice: Reject her human side and bond with Eenoki to become the Earth’s Priestess – or be killed along with the rest of humanity. 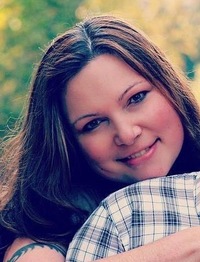 Arwen Paris is the author of young adult fiction. Her debut YA Sci-fi Urban Fantasy novel FATE OF THE STARS was released on September 1, 2017. The action-packed pages of her novels are filled with characters that are forced to face fears they never expected. When she’s not writing, you can see posts of her (too many) vacations that keep her sane. Arwen lives in Washington, has a big crazy family and after the day job, she writes Fiction For the Fearless – #F3Fanatic.

Disclosure: I was kindly given a review copy of Fate of the Stars by Xpresso Book Tours for taking part in the tour. This in no way affects the integrity of my review and as usual, all my comments are my honest opinion.

Fate of the Stars was an exciting and exhilarating read. I love sci-fi novels and the beautiful cover really appealed to me-luckily it did not disappoint!

The story is told in first-person which gives it a personal and immediate feel. From the very first chapter, I felt like I was transported to Allison’s world and wanted to find out more about her. She is quite a shy and withdrawn character at the beginning of the novel, still reeling from the sudden death of her father and struggling to cope with her mother’s emotional disconnection. She is trying to put on a brave face, but she feels like she doesn’t belong with the care-free teenagers enjoying summer beach parties and letting their hair down.

But suddenly, all of Allison’s problems are overshadowed by the huge threat of an alien invasion and the world as she knows it comes crashing down around her. Now it’s all about survival and keeping those she loves safe. I really liked how I was thrown into the action almost straight away. However, at times it did seem a little rushed and I had to read some parts over again to understand what was going on.

Paris’ writing is rich and detailed and she creates a vivid picture of the devastation following the invasion and of the mysterious creatures called the Ma’tiok who are taking over and viciously attacking everyone in their path. I enjoyed learning more about the Vongjar and the Hytan.

The concept of Eenoki taking over Allison’s body was really interesting as she offers a different perspective on events and gives us extra information and background on what is going on. It also means that Allison gains extra abilities such as super speed and strength that allow her to act heroically. But at the same time, Allison is still a teenage girl who is never at ease with these new powers, always questioning who she is becoming and whether what she is doing is right. I really felt for Allison as she goes through so much and literally has the weight of the world on her shoulders.

I didn’t really relate to any of the other characters as much as I did to Allison, probably because we see everything from her perspective. I also wasn’t a fan of the love-triangle element because I think that’s quite overdone in YA and didn’t really add anything to the story. Luckily, it didn’t dominate the plot, which was mostly focused on Allison’s journey to becoming more strong and assertive and the huge decisions she faces. The plot was good, but there was a section in the middle that was a bit slow-moving and frustrating and there were some unanswered questions at the end. I hope that there will be a sequel to tie up some of the sub-plots.

Overall, I thoroughly enjoyed Fate of the Stars and found it to be quite different from other YA novels I’ve read. I hope there is more to come from this author, as this could be a promising start to a series. I would recommend this book to anyone who enjoys reading YA sci-fi, especially books like The Host by Stephanie Meyer or Across the Universe by Beth Revis.

The giveaway below is open for residents of the US and Canada only. Enter for the chance to win an Apple iPad mini 4. The closing date is September 14th. Please refer to my own terms and conditions.


Would you like to read Fate of the Stars?


This blog tour was organised by: 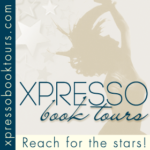