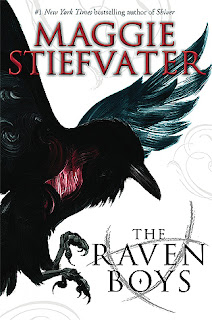 Every year, Blue Sargent stands next to her clairvoyant mother as the soon-to-be dead walk past. Blue never sees them–until this year, when a boy emerges from the dark and speaks to her.

His name is Gansey, a rich student at Aglionby, the local private school. Blue has a policy of staying away from Aglionby boys. Known as Raven Boys, they can only mean trouble.

But Blue is drawn to Gansey, in a way she can’t entirely explain. He is on a quest that has encompassed three other Raven Boys: Adam, the scholarship student who resents the privilege around him; Ronan, the fierce soul whose emotions range from anger to despair; and Noah, the taciturn watcher who notices many things but says very little.

For as long as she can remember, Blue has been warned that she will cause her true love to die. She doesn’t believe in true love, and never thought this would be a problem. But as her life becomes caught up in the strange and sinister world of the Raven Boys, she’s not so sure anymore.

Having previously enjoyed the Wolves of Mercy Falls series, I was curious as to whether The Raven Boys would be as compelling. Based on the synopsis, I was expecting an enjoyable yet fairly run-of-the-mill YA paranormal romance based on the forbidden love trope. However, The Raven Boys is so much more than that and it exceeded my expectations. I was pleasantly surprised that the romance aspect was subtle. Instead, the relationship between the four Aglionby students, known as ‘Raven Boys’ and their quest to discover the lost king Glendower takes centre stage.

As usual, Stiefvater’s writing is rich and nuanced. There are lines that you can take at face value on the first reading, then later realise it was metaphor, foreshadowing or a clue to a major plot twist. Her descriptions are vivid and complex at times, but not overly flowery and the balance between description and action is just right.

The novel started slowly, but I soon grew to love each of the unique characters and the complicated relationships between them. Gansey is rich, handsome and the natural leader of the group. I normally don’t warm to this type of character at all, but layer by layer, Stiefvater gradually introduces us to a more likeable, vulnerable Gansey. Beneath his confident exterior, he has a deep longing for adventure, a tendency towards obsession and a feeling of loneliness and responsibility that leads him to work furiously hard at keeping his band of friends safe and happy, whatever it takes. The plot focuses on his plans to follow the ley lines (paranormal lines of energy) in order to discover the burial place of Glendower, a legendary Welsh hero.

Gansey is aided (and sometimes hindered) by his three fellow students, Ronan, Adam and Noah. Ronan is a clever yet troubled boy with a dark past, a sharp wit and a tendency to get into nasty fist fights. He is the least likeable of the four in my opinion, but as events unfolded I did warm to him somewhat. Adam is his polar opposite-kind, gentle, observant and quiet. I was immediately drawn to him and he became my favourite character. Unlike the other boys, he comes from a poor background and suffers abuse at the hands of his father, but is too proud to accept Gansey’s offers of money and accommodation. If he leaves, he wants it to be on his own terms. Noah was the character I felt I knew least about. In some scenes he is mentioned only fleetingly and there is something mysterious and ‘off’ about him, which all makes sense later on.

The other significant character is Blue-a quirky girl brought up in a family of psychics. She doesn’t have the gift of clairvoyance or prophesy and is not privy to the secrets of the paranormal that her mother and the rest of the household trade in. However, she does possess a lot of energy which makes others’ powers stronger, so they involve her in many of their readings and rituals. Still, she feels like she is on the outside looking in, until a strange incident in a graveyard causes her fate to be inexplicably linked with Gansey’s. Against her mother’s wishes, she becomes friends with the raven boys and teams up with them in their search for Glendower.

The prophecy mentioned in the synopsis-that Blue will cause her true love to die-is not dwelled upon too much. This is not a typical angst-filled forbidden romance. There is a blossoming potential relationship in the book, but not between the characters I expected. The focus is on the hunt for Glendower and the mysterious paranormal experiences they have along the way. I prefer action and mystery over romance, so that really appealed to me. There was a good twist in the middle of the book that I didn’t see coming and I had to go back and re-read some of the earlier chapters to make sense of it. As a true fantasy fan, I really enjoyed the magical scenes at Cabeswater. I also loved the complex relationship between the boys, who all have their ups and downs, but each need their friends in some way.

The only negative aspect of the book for me was that it started quite slowly. I’m glad I persevered, because the story just got better and better. Similarly, the ending wasn’t as explosive as I would have liked. I felt there was a lot of tension building up that didn’t really come to anything. There was a confrontation, but not much of a resolution. That’s the only reason I haven’t given it the full five stars. However, I’m sure some of the loose ends will be tied up in the sequel. I’m looking forward to reading The Dream Thieves to find out how the characters have been affected by what happened at the end of this book and to hopefully have some more mysteries explained.

I would recommend The Raven Boys to anyone that enjoys YA fantasy and paranormal where the focus is on mystery and adventure rather than romance. If you are interested in ‘new age’ spirituality and the supernatural, this will also appeal to you. Fans of Stiefvater’s other series will probably also enjoy this book.

Have you read The Raven Boys? What did you think?