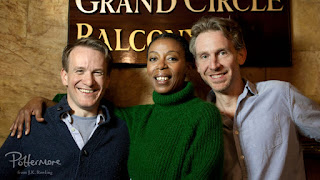 After today’s casting announcement for the ‘Harry Potter and the Cursed Child’ stage play, it seems that a lot of fans are up in arms about Hermione being played by black actress, Noma Dumezweni. I’ve been reading through a lot of the comments and it’s got me thinking about how much the race and general appearance of an actor matters when casting an iconic role like this.

Firstly, let me start by saying that I’ve tried to consider opinions on both sides in this post and to keep my discussion of the subject respectful. As a white woman, I’m in no way qualified to speak on behalf of PoC, nor would I presume to. But I do think that we should all be joining in the dialogue as it’s an important issue, so what follows is my own personal take on things.

Perhaps people feel so strongly about this because Emma Watson did such a fantastic job of portraying Hermione. She definitely brought the character to life just as I imagined her, but I’m open-minded enough to accept that there are other possible ways to imagine Hermione. I can understand that people are disappointed by the lack of continuity between the films and the play, but the original cast members obviously want to move onto new projects and at some point they have to pass on the torch to other actors. We have to think of the play as a separate interpretation of the Harry Potter universe, rather than as a sequel to the films. We’re used to seeing different interpretations of the same character all the time in TV and film-just look at James Bond and Dr Who. Things are always changing and how a character appears on screen or on stage is not always going to reflect your mental image of them.

I could perhaps understand the outrage if Hermione was explicitly described as a white character in the books, but J K Rowling has said herself that Hermione’s skin colour wasn’t specified. Some have argued that in Prisoner of Azkaban there is a line that says ‘Hermione’s white face was sticking out from behind a tree’. However, in context the use of the word ‘white’ here could just be indicating that her face had become ashen or drained of colour because she was scared, not necessarily that she was pale-skinned. Even if Hermione does have white skin in the books, does it really matter?
I suppose it depends on your point of view. It could be argued that changing Hermione’s skin colour has implications for her character in the sense that she now belongs to a completely different racial and cultural background. As a muggle-born witch, Hermione encounters prejudice from extremist ‘pure-blood’ wizarding families and becomes an advocate for the rights of minorities such as house elves, who have lived under the oppression of wizards for years, forced into roles of servitude. If we imagine her as a person of colour, she may be also treated as ‘other’ by her predominately white peers and this might further explain her passionate views on issues of prejudice and oppression in society. For me, this would only add extra dimension to the character, not take anything away. 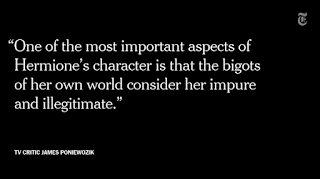 Crucially, Hermione’s race or appearance aren’t defining aspects of her character. Her skin colour has absolutely no bearing on the plot. If it did, then I would likely feel differently about the casting. I was more annoyed about the fact that Harry has blue eyes in the films because it was explicitly mentioned several times throughout the series that Harry has green eyes. Not only that, but the fact that they bear a striking resemblance to his mother’s is a major plot point. But as lovely as she is, Ellie Darcey-Alden who plays the young Lily Potter, has brown eyes. You’ll notice that the actors cast for Harry and Ron in the play don’t exactly match the descriptions from the book, but there’s barely been any mention of that. People seem to be less concerned about changes in eye colour, hair colour, height and build than there are about race. I remember the horrified responses that some readers had to the casting of Amandla Stenberg as Rue in the Hunger Games, despite there being several references to her ‘dark skin’ in the book. I think that this can be attributed to a bias whereby white readers will tend to assume a character is white like them unless it is explicitly stated otherwise.
Yet characters who are originally written as people of colour in canon work are frequently replaced with white actors (sometimes known as ‘white-washing’). Recently, half-Ethiopian Nora from Warm Bodies was played by the fair skinned and blonde haired Analeigh Tipton. Most of the main roles in Exodus: Gods and Kings were played by white actors-Christian Bale as Moses, Joel Edgerton as the Pharoah Rhamses and Sigourney Weaver as the Pharoah’s mother. In Harry Potter and the Chamber of Secrets, Lavender Brown was played by a black actress, but was replaced by a white actress in later films.
Now, you might think I’m being hypocritical or overly PC here in saying that having white actors playing black characters is unacceptable but having black actors playing white roles is perfectly okay. Isn’t it the same thing? Well, no. PoC already receive little representation in the media except for a few token and often stereotyped roles, despite there being a growing pool of PoC actors with amazing talent. White people are not under-represented in the entertainment industry, so when a black actor plays a traditionally white role, such as Hermione, this is really only starting to ‘balance things out’ and is something to be celebrated, in my opinion.
That being said, I don’t believe in casting PoC just for the sake of it, or in an attempt to appear more politically correct. The main thing we should be concerned about is the actors’ ability to portray the character effectively, not their race or appearance. Noma Dumezweni is an Olivier Award-winning actress who has received rave reviews for her recent stage performance in ‘Linda’ and has had starring roles in ‘The Winter’s Tale’ and ‘Romeo and Juliet’ for the Royal Shakespeare Company. J K Rowling has already expressed her approval:

At the end of the day, Harry Potter is J K Rowling’s ‘baby’, so if she endorses the casting choices, that’s good enough for me.

What do you think about this? How much does an actor’s race or appearance matter? Do you think Dumezweni is a good choice to play Hermione? I would love to hear your thoughts, but please keep discussion respectful.