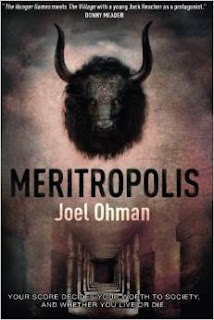 The year is AE3, 3 years after the Event. Within the walls of Meritropolis, 50,000 inhabitants live in fear, ruled by the brutal System that assigns each citizen a merit score that dictates whether they live or die. Those with the highest scores thrive, while those with the lowest are subject to the most unforgiving punishment—to be thrust outside the city gates, thrown to the terrifying hybrid creatures that exist beyond.

But for one High Score, conforming to the System just isn’t an option. Seventeen-year-old Charley has a brother to avenge. And nothing—not even a totalitarian military or dangerous science—is going to stop him.

Where humankind has pushed nature and morals to the extreme, Charley is amongst the chosen few tasked with exploring the boundaries, forcing him to look deep into his very being to discern right from wrong. But as he and his friends learn more about the frightening forces that threaten destruction both without and within the gates, Meritropolis reveals complexities they couldn’t possibly have bargained for…

Disclosure: I received a free eBook copy of Meritropolis from the author in exchange for an honest review.

Meritropolis was an easy, fast-paced read that I found to be very typical of the dystopian genre. Each of the 50,000 inhabitants of Meritropolis is assigned a numerical score that decides their worth to society and whether they get to remain in the city or are cast outside the gates and left to die. The main character, Charley, plots to take down the system responsible for ‘zeroing’ his brother-leaving him at the mercy of the terrifying hybrid creatures that exist outside the city.

The notion of a society that ranks its citizens based on a scoring system is a familiar one, but Ohman does bring some unique elements to this premise. For example, the strange hybrid creatures that live outside the walls of the city added an additional threat. This was an interesting development that added lots of tension to the plot, but they did have quite silly names and far-fetched descriptions that just didn’t seem believable to me.

The main thing I enjoyed about Meritropolis was that there was plenty of action. The main characters didn’t spend too long thinking over what they should do-for the most part they put plans into action quickly. There was an exciting scene where they tried to break into the hospital and some good battle scenes at the climax of the novel.

However, my main disappointment with the novel was that it was quite simplistic and at times read more like a middle grade novel than a young adult one for me. The score system that determines the citizens’ worth wasn’t explained as fully as it could have been. The controlling system running Meritropolis wasn’t really developed either-all we are really told is that the scoring system exists because of limited resources in the city, so a ‘survival of the fittest’ strategy is needed. It’s the classic utilitarian idea of the needs of the many outweighing the needs of the few.

I think it would have been more interesting if some of the common dystopian tropes were turned on their head-for example, if the protagonist had been someone with a low score rather than someone special and in the elite minority. I didn’t feel that it was explained how Charley came to have such good fighting skills or academic ability, so he could possibly be accused of being a bit of a ‘Gary Stu’.

Another problem was that a lot of the plot felt contrived. Because of his high score, Charley is pardoned after an act of rebellion against the system, when it would have made more sense for Commander Orson to kill him and stamp out the threat there and then. Charley also just happens to be given crucial information from a powerful character who takes a liking to him on their first meeting. It all just seems a bit too convenient.

I didn’t really connect well to Charley as a main character as he seemed arrogant, but I did like Sven and Sandy. The rest of the characters weren’t really well fleshed-out or memorable. However, one good thing about Meritropolis was that the plot wasn’t overshadowed by romance. Some romantic interest between Charley and Sandy was hinted at, but it took a back seat to the main action. Ohman thankfully didn’t use some of the usual YA clichés such as insta-love or a love triangle.

Overall, despite some plot weaknesses, Meritropolis was an enjoyable read. I would recommend it to fans of similar dystopian novels such as Divergent and especially Marie Lu’s Legend series. I think that slightly younger readers would enjoy this novel, especially boys. However, the novel didn’t really capture my imagination or leave me desperate to find out how the story develops, so I probably won’t bother with the sequel, Meritorium. I mostly agree with this review by Milo.

Have you read Meritropolis? If so, what did you think?