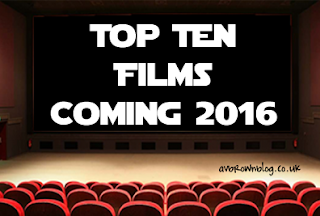 2016 looks like a fantastic year for films. Some of my favourite franchises are releasing sequels this year and I’m so excited to see them already. Although with a new baby, we’ll probably have to wait for them to come out on DVD.

Here’s a list of the films I’m most anticipating for 2016:

“With the emergence of the world’s first mutant, Apocalypse, the X-Men must unite to defeat his extinction level plan.”

I’ve loved the new X Men films so far-the plots and casting have been spot on in my opinion. I’m a big fan of Jennifer Lawrence, James McAvoy and Michael Fassbender especially, and to see them act alongside Sir Patrick Stewart and Sir Ian Mckellen has been a real treat. After seeing the trailer for this the other day, I am now totally hyped for it! It will be interesting to see how Sophie Turner (Sansa Stark) is as Jean Grey. It looks like James McAvoy has finally completed the transition into the iconic bald-headed professor that we all know and love. Check it out below!

This is another sequel I’m really looking forward to. As a die hard fan, I don’t think anything can compete with the original Star Trek films, but I think J J Abrams has produced a fantastic reboot of the franchise so far and his films are brilliant in their own right, bringing Star Trek to a whole new generation of fans and making it almost ‘cool’ again. The casting is near-perfect for me, especially Zachary Quinto as Spock and Karl Urban as Bones.

Not much is known about the plot of the new film and the trailer doesn’t give much away, but I am excited to see that it features Idris Elba, presumably playing a big, bad villain.

“Beatrice Prior and Tobias Eaton venture into the world outside of the fence and are taken into protective custody by a mysterious agency known as the Bureau of Genetic Welfare.”

I was a little disappointed with the ending of the book series (though not for the reason you might think-full review coming soon!). However, I’m still interested to see how the film will tackle the content of Allegiant, especially as they diverged (pun intended) quite a lot from the original plot of Insurgent. I’m a bit annoyed that they’ve followed the trend of splitting the last book into two parts, as there doesn’t seem to be enough content in Allegiant to make it stretch across two films, but we shall see. The trailer does look pretty exciting and action-packed.

4) Fantastic Beasts and Where to Find Them, 18th November

“The adventures of writer Newt Scamander in New York’s secret community of witches and wizards seventy years before Harry Potter reads his book in school.”

As a massive Harry Potter fan, of course I’m excited for this release. There are so many amazing mythological creatures in the HP universe that I’m hoping will be featured and it will be interesting to see what wizarding society is like 70 years before Harry’s time. Eddie Redmayne (of Les Mis fame) is a great actor so I’m looking forward to seeing his performance as Newt Scamander. Here’s the announcement trailer that was released yesterday (although it doesn’t reveal much):

“A girl named Sophie encounters the Big Friendly Giant who, despite his intimidating appearance, turns out to be a kindhearted soul who is considered an outcast by the other giants because unlike his peers refuses to eat boys and girls.”

Roald Dahl’s The BFG is one of my favourite childhood books and I loved the animated film starring David Jason, so I really hope they do this one right! I have high expectations for celebrated stage actor Mark Rylance as the BFG, as I thought he was brilliant in the recent BBC series Wolf Hall. I also like the idea of Penelope Wilton (something of a national treasure) playing the Queen.

“The friendly-but-forgetful blue tang fish reunites with her loved ones, and everyone learns a few things about the true meaning of family along the way.”

I loved Finding Nemo so am really hoping that this will be every bit as good, although it seems like it could be quite predictable.

“A former Special Forces operative turned mercenary is subjected to a rogue experiment that leaves him with accelerated healing powers and adopts the alter ego Deadpool.”

As I haven’t read the comics, I don’t know a lot about Deadpool other than what I saw in X Men Origins: Wolverine. He starts out as a soldier and mercenary called Wade Wilson who has super-human reflexes and is pretty lethal with a pair of sharp blades. He’s a member of Team X alongside Wolverine, under the command of villain William Stryker. When the team break up he’s experimented on by Stryker and turned into Weapon XI, with an adamantium skeleton and a combination of several different mutants’ powers (optic lasers, healing, teleportation and technopathy). Stryker calls him Deadpool because he’s a ‘dead’ mutant with other powers ‘pooled’ into him. Stryker is able to control him to fight Wolverine, but eventually Wolverine manages to chop his head off and kick him into a nuclear reactor. However, later he is seen alive.

My husband assures me that Deadpool is a brilliantly hilarious character in the comics, who is apparently completely insane and has a variety of weapons and powers. The trailer looks pretty funny and I’m glad to see that Ryan Reynolds is returning to play him for this.

“An orphan boy is raised in the jungle with the help of a pack of wolves, a bear, and a black panther.”

Another Disney classic that is being made-over as a live action film. I really hope they do it justice! The trailer looks pretty epic and the line-up sounds awesome as it includes Scarlett Johansson, Idris Elba, Bill Murray, Christopher Walken and Ben Kingsley.

“Jane Austen’s classic tale of the tangled relationships between lovers from different social classes in 19th century England is faced with a new challenge — an army of undead zombies.”

This mash-up of Jane Austen’s classic and modern Zombie movies is based on the parody novel of the same name by Seth Grahame-Smith. It has an impressive sounding cast, comprised of Lena Headey and Charles Dance (Cersei and Tywin Lannister from GOT), Lily James (Cinderella) and Matt Smith (Doctor Who). This is sure to be a lot of gruesome fun if you’re looking to see something a bit different.

“After his career is destroyed, a brilliant but arrogant surgeon gets a new lease on life when a sorcerer takes him under his wing and trains him to defend the world against evil.”

Again, I don’t know much about the character of Doctor Strange (apart from that he’s some kind of sorcerer), but as I am a slave to the unstoppable commercial juggernaut that is Marvel I am sure I will have to go and see this. It comes out just a day before my husband’s birthday, so I’m sure I’ll be paying too. It stars Benedict Cumberbatch, Rachel McAdams and Tilda Swinton. As far as I know there’s no official trailer for it yet.

Which new releases are you looking forward to next year? What do you think of all the trailers?