Professor McGonagall is one one of my favourite characters. She’s such a strong, no-nonsense kind of woman. She goes from being a rather stern, disapproving character whom Harry and co. are a little afraid of, to someone they really respect and trust. There are many moments in the books when McGonagall surprises us by doing away with convention, challenging authority and standing up for what she believes in. Though at first she may be mistaken for a Ravenclaw, she truly deserves her position as head of Gryffindor house.
I always liked the moment in the Philosopher’s Stone when Harry thinks he’s going to get told off for flying his broomstick without permission, only to find out that McGonagall is pleased to have found a new seeker for the Quidditch team. There’s also a fantastic moment in The Half Blood Prince when she goes up against Snape to protect Harry. And of course she is essential in the Battle of Hogwarts, transfiguring statues and coats of armour to come to life and fight against Voldemort’s army:

But I think my favourite Professor McGonagall moment of all time is her reaction to the character of Dolores Umbridge in The Order of the Phoenix. While normally a stickler for rules and respect, she hates Umbridge so completely that she lets the students get away with tormenting her. Here are some quotes from that part of the book: 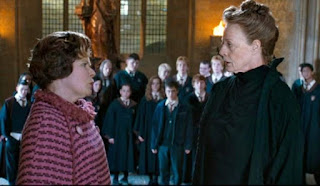 “Harry witnessed Professor McGonagall walking right past Peeves who was determinedly loosening a crystal chandelier and could have sworn he heard her tell the poltergeist out of the corner of her mouth, ‘It unscrews the other way.”

“Is it true that you shouted at Professor Umbridge?’
‘Yes,’ said Harry.
‘You called her a liar?’
‘Yes.’
‘You told her He Who Must Not Be Named is back?’
‘Yes.’
Professor McGonagall sat down behind her desk, frowning at Harry. Then she said, ‘Have a biscuit, Potter-‘
‘Have- what?”

“I should have made my meaning plainer,’ said Professor McGonagall, turning at last to look Umbridge directly in the eyes. ‘He has achieved high marks in all Defence Against the Dark Arts tests set by a competent teacher.”

“I wonder,” said Professor McGonagall in cold fury, turning on Professor Umbridge, “how you expect to gain an idea of my usual teaching methods if you continue to interrupt me? You see, I do not generally permit people to talk when I am talking.”

“Potter has no chance whatsoever of becoming an Auror!”
Professor McGonagall got to her feet, too, and in her case this was a much more impressive move; she towered over Professor Umbridge.
“Potter,” she said in ringing tones, “I will assist you to become an Auror if it is the last thing I do! If I have to coach you nightly, I will make sure you achieve the required results!”

We all love to see Umbridge taken down a notch or two! What’s your favourite McGonagall moment?