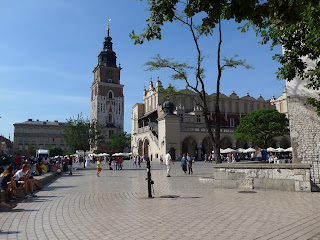 Welcome to the second and final part of my story about my recent trip to Poland. The first part covers my experience of a traditional Polish wedding and local culture. This post is all about one of the major tourist cities in Poland: Kraków.

Kraków is the second largest and one of the oldest cities in Poland and was once the capital. It was about three and a half hours away from the original place we stayed at, near Aleksandrów.

It’s worth reading up about the city if you’re interested in history. It’s been one of the centres for Polish art and culture for centuries, but it has a sad past, affected heavily by German invasion in WWII and the ensuing holocaust. Though that history can obviously never be forgotten, today the city is thriving with many tourist attractions, a lovely relaxed atmosphere and beautiful architecture.
We stayed in a self-catering apartment called Zamkova 15, which was very spacious and modern. It was just a short walk over the bridge into the city centre. There we found so many things to see and do. You could take a riverboat cruise or go up in an air balloon to see the sights, but we chose to go on a horse and cart ride instead. We felt a bit like royalty travelling through the streets in style. My favourite part of the city was the old market square, which reminded me quite a bit of Covent Garden in London. There was a large plaza with statues and fountains and an indoor market, surrounded by lots of fancy shops and cafés with al fresco dining. There were lots of tourists, flower sellers and street performers. 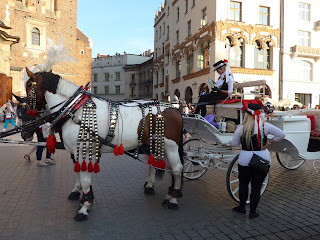 There seemed to be a big amber trade there, as we saw lots of shops and market stalls selling exclusively amber jewellery. There were also lots of craft shops with carved wooden toys and ornaments for sale and traditionally patterned scarves and bags. I bought a beautiful coaster made of tile that had a colourful painting of the city on it. 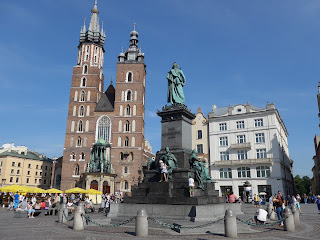 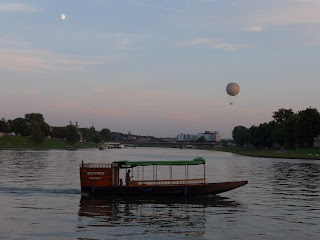 We spent several hours exploring Wawel Castle, which was built by order of Casimir III the Great, who reigned from 1333 to 1370. It was the home to several Polish monarchs and now has a number of historical and art exhibitions open to the public, including the state rooms, royal private apartments, crown treasury and armoury and Sandomierska Tower. You only have to pay for the parts you would like to visit, and all are fairly priced. 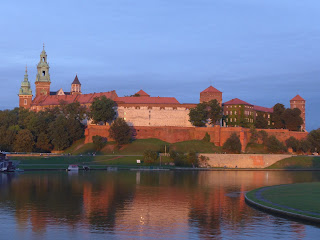 We decided to see the Oriental art exhibition, which was a display of artefacts, armour and weapons from places like Turkey, China, Japan and Persia. Some of the artefacts were trophies from the Vienna campaign in which the Polish army commanded by John III Sobieski gained victory over the Turkish army. We also saw some ornate porcelain vases from China. Unfortunately you couldn’t take photos. It was very interesting as most museums I’ve been to are very anglo-centric so I’d never seen anything like that before. 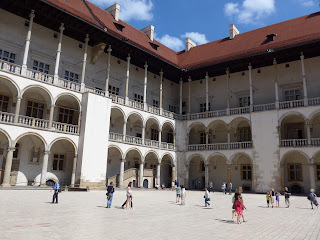 We also visited the cathedral inside the castle grounds, which was free to enter. It was beautifully ornate with lots of gold and marble statues inside. We went down into the ‘Bard’s crypt’ which contains the remains of two 19th century Polish poets-Adam Michkiewicz and Juliusz Slowacki-as well as the symbolic tomb of Cyprian Kamil Nowid and a plaque commemorating the composer Frédéric Chopin. 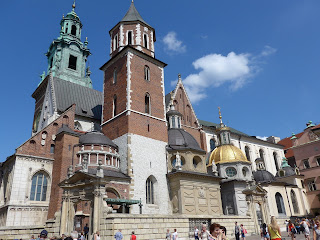 After that we went down a long, winding staircase into the Dragon’s Den, caves beneath the castle in which-legend has it-a dragon once lived. This story is from the Chronicle of Master Vincent from the turn of the 13th century:

“In the tunnels of a certain rock there lived an immensely dreadful monster, whom some used to call the whole-eater. Every week his voracity called for a fixed number of cattle. If the settlers had not supplied the cattle (as sacrificial beasts) they would be punished by losing the equivalent number of human heads. Grakch [Cracus] could not tolerate the shame of this […] and he secretly called his sons, told them of his intention and presented a solution […] To which they answered: […] ‘It is you who has the power to give orders, and we are here to obey’. Having experienced many, and generally futile, skirmishes, they were forced to use deception. In the place of the cattle they put cattle’s skins stuffed with ignited sulphur. And when the whole-eater swallowed it with great appetite, he suffocated from the outburst of an internal fire. Immediately after this, the younger brother attacked and killed the older, his partner in victory and in the kingdom, treating him not as a companion but as a competitor. He lied that it was the monster who was guilty of the killing, and his father happily accepted him as a winner. Thus the younger Cracus succeeded his father, benefiting from his crime! But he was tainted with fratricide longer than he was awarded with power. Soon after, the deceit came to light, and as punishment for his deed, he was banished forever[…] And it was indeed on the rock of the whole-eater that the famous city was soon established, named Cracovia from Cracus’ name, to commemorate him forever. The funeral ceremony finished only when the city was completed. Some named it Cracow because of the crowing of the crows, who flew in attracted by the carcass of the monster.”

Cool or what? There is a statue in honour of the dragon that belches fire right outside the exit of the caves. 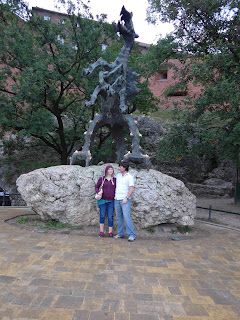 All in all, Kraków was a fantastic place to visit and we’d like to go again someday to discover some of the attractions we didn’t have time to visit, like the salt mines.

« Holiday in Poland Part I: The Wedding, Czarny Staw and Zgierz
Harry Potter Moment of the Week (8) Philosopher’s Stone Trials »