Today I’d like to introduce you to the fantasy novel Darkhaven by A.F.E Smith, released on 2nd July by HarperVoyager.

Keep reading to discover the synopsis, author bio and an interview with the author about their writing process for Darkhaven. 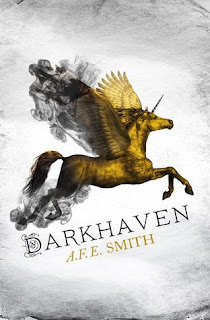 Ayla Nightshade never wanted to rule Darkhaven. But her half-brother Myrren – true heir to the throne – hasn’t inherited their family gift, forcing her to take his place.

When this gift leads to Ayla being accused of killing her father, Myrren is the only one to believe her innocent. Does something more sinister than the power to shapeshift lie at the heart of the Nightshade family line?

Now on the run, Ayla must fight to clear her name if she is ever to wear the crown she never wanted and be allowed to return to the home she has always loved.

A.F.E. Smith is an editor of academic texts by day and a fantasy writer by night. So far, she hasn’t mixed up the two. She lives with her husband and their two young children in a house that someone built to be as creaky as possible – getting to bed without waking the baby is like crossing a nightingale floor. Though she doesn’t have much spare time, she makes space for reading, mainly by not getting enough sleep (she’s powered by chocolate). Her physical bookshelves were stacked two deep long ago, so now she’s busy filling up her e-reader.
What A.F.E. stands for is a closely guarded secret, but you might get it out of her if you offer her enough snacks.

T: What’s your elevator pitch for Darkhaven?
A.F.E: When the shapeshifter overlord of Darkhaven is murdered, suspicion falls on his daughter Ayla. Now a hunted fugitive, Ayla needs to find the real culprit before she is captured and locked up forever.
T: That sounds intriguing. What were your main inspirations when writing Darkhaven?
A.F.E: Usually I just say that the opening scene came to me first, and the rest of the book developed from there. But if I’m completely honest, I always find this question impossible to answer truthfully. Inspiration is such a tricksy beast. Sometimes there’s one really obvious source of inspiration for a book or story, but I think far more often it’s a jumble of different things. I’m inspired by odd little events that happen in real life, and paintings, and music, and other books, and places, and half-remembered childhood emotions, and so on ad infinitum; and all that stuff swirls around in my head and makes a new pattern, and that becomes a book.

With Darkhaven I can pinpoint a few inspirations, but none of them obviously have a great deal in common with the finished book, and I’m sure there are far more inspirations that I haven’t identified. A lot of inspiration is subconscious. Things lodge in my brain, and shift shape, and emerge in a new form, and then months or years afterwards I’ll stumble across the original source and think So that’s where I got that from!


A.F.E: Darkhaven can be read as a standalone novel, but it will have at least two sequels, both of which are due out next year. The first is called Goldenfire.
I have a couple of other projects currently on the back burner, which I’ll turn to once I’ve delivered the third Darkhaven book to the publisher. One is a slightly untraditional epic series and the other is a YA contemporary fantasy. So plenty to keep me busy!

T: Sounds exciting! Thanks for answering all my questions in such detail. I feel like I’ve learned a lot about Darkhaven and am looking forward to reading it.

Did you enjoy the interview? Does Darkhaven sound like something you’d like to read? Let me know in the comments.

« Stacking the Shelves (13)
Harry Potter Moment of the Week (6) Place you wish we’d explored in the series but didn’t? »