Why, my favourite ship would have to be the Durmstrang ship.

Only kidding! ‘Ship’ of course refers to our favourite romantic pairing of the series. I’m going to have to go with the canon here and say ‘The Good Ship’ Ron/Hermione, also known as ‘Harmony’.
I know a lot of people ship Harry/Hermione, and I can see why they would. They obviously care about each other and have been through a lot together. When Ron and Harry fell out in The Goblet of Fire and then later in The Deathly Hallows, Hermione stuck by Harry and the two shared some pretty special moments, such as the visit to the Potters’ graves in Godric’s Hollow. Even J K Rowling admitted that Ron may have not been the best match for Hermione, and said that the couple may have needed relationship counselling. 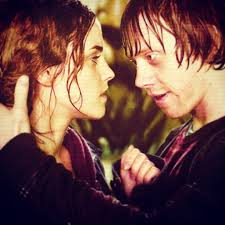 However, in my opinion Harry and Hermione’s relationship is purely platonic.

“She’s like my sister,” he went on. “I love her like a sister and I reckon she feels the same way about me. It’s always been like that. I thought you knew.”
~Harry to Ron in The Deathly Hallows.

I love reading about love/hate relationships that blossom gradually into romance. I enjoyed the chemistry and banter between Ron and Hermione in the early books, and it soon became clear that there was a reason they were always teasing each other. It took a while to get off the ground, mostly because Ron was too stubborn to admit his feelings and it all came to a head with Ron’s jealousy over Hermione and Krum in The Goblet of Fire. In the books that followed, Hermione and Ron sought comfort and protection in each other more and more, such as at Dumbledore’s funeral and when they fell asleep holding hands in The Deathly Hallows. 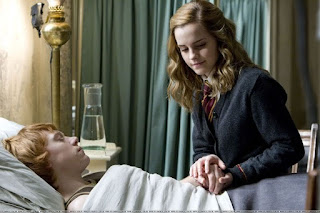 They say opposites attract, and I think that’s true in a lot of cases. I think Ron and Hermione would be good for each other, as Hermione would build up Ron’s self-esteem and encourage him to be more ambitious and Ron would be a source of strength for Hermione and keep her in check if she became too bossy or patronising. As well as that, I think Harry and Ginny make a better match (I’m talking about the fiery, confident Ginny from the books, not the lame one from the films). They have more in common-such as a mutual love of Quidditch.
So although Ron and Hermione’s relationship isn’t perfect, I love the fact that Hermione didn’t end up with the ‘hero’ and there wasn’t a messy love triangle. Hermione could always see the good qualities in Ron, even though he was largely in Harry’s shadow. I love that she fell for the awkward sidekick, who came from a poor wizarding family and had no obvious outstanding talents, rather than the rich and dashing ‘chosen one’. 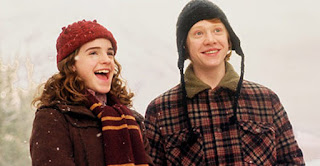 What do you think? Do you ship Ron/Hermione? What’s your favourite HP ship?