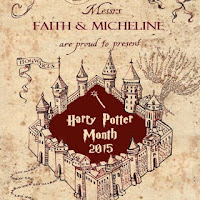 Harry Potter Month is a yearly event taking place throughout the month of July, to coincide with Harry Potter’s birthday. Hosted by Faith at GeekyZooGirl and Micheline at Lunar Rainbows Reviews, the aim is to fill the month with all things Potter. There are themed posts, discussions, art and fans rereading the books and rewatching the movies, all of which will earn the participants House-Points towards the House Cup at the end of the month. For more information or to sign up, click here.

Unfortunately I only found out about Harry Potter Month yesterday, so I’m really late to the party, but I’m going to try to join in a little anyway.

Today I thought I’d introduce myself to HP Month by sharing some of my personal Harry Potter statistics, fun facts and favourite things about the series. Feel free to share your own answers in the comments or in your own blog posts.

Age when I discovered the books: 11. I read the last book when I was 18, so I really feel like I grew up with Harry and his friends.

HP characters I share a birthday with: I was born on July 30th, so I share my birthday with Neville Longbottom! It’s also the day before Harry Potter and JKR’s birthdays.

HP characters I most identify with: Harry, Remus.

HP related books owned:  The main series, plus Quidditch Through the Ages, The Tales of Beedle the Bard, The Magical Worlds of Harry Potter and Harry Potter Film Wizardry.

Favourite books: The Prisoner of Azkaban and The Deathly Hallows.

Favourite movies: The Prisoner of Azkaban, The Goblet of Fire, The Deathly Hallows Part 1 & 2. Least favourite scenes: the main deaths, when Ron walks out in The Deathly Hallows, when Lupin and Harry fall out and Harry calls him a coward, when Draco gets Hagrid in trouble, when there are negative things published in the Daily Prophet about Dumbledore.

Least favourite things about the movies: when they showed who created the dark mark at the Quidditch World cup and omitted Winky the house-elf, when they failed to explain who created the marauder’s map and what animagi are, when they left out Peeves and Nick’s Deathday Party, when they missed out S.P.E.W, the lack of screentime that Remus/Tonks got.

Chapter I’m currently on: De-gnoming the garden (Chamber of Secrets)

My HP blog posts: I’ve blogged about HP many times, you can find all my posts here. Here are some of my favourites:

Favourite HP memes and gifs: Find them all here, on my Pinterest board.