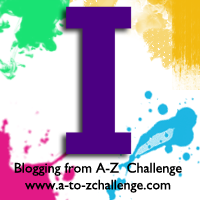 For the letter ‘I’ I have chosen the colour Indigo. Indigo is a deep, bright shade of blue, named after the blue dye derived from the plant Indigoferatinctoria. It’s quite a popular colour in fashion, being the traditional colour of denim, and is the most common colour of ink used for writing.

This Pinterest board has some beautiful examples of indigo.
Keep reading to discover the symbolism behind this colour and read my indigo poem.

Indigo is associated with India, believed to be the oldest center of indigo dyeing in the world. The Greek word for the dye was ‘indikon’. Indigo is used to represent the sixth chakrra (Ajna), which is said to include the third eye and is believed to be related to intuition and spiritual knowledge.

In ‘New Age’ philosophy, indigo represents intuition. Psychics who claim to see people’s auras associate an indigo aura with someone who has an interest in religion or an intense spirituality. It is also associated with mystery, magic, wisdom, creativity and drama.

Today I’d like to share with you a poem I just wrote, inspired by the colour indigo. I originally did two versions of the poem-one with rhyme and one without and couldn’t decide which to post. After much debate, friends and family voted in favour of the rhyming poem (3/4), so that’s the version I’m sharing. But stay tuned, because after the A-Z challenge I plan to do a blog post featuring both and discuss the pros and cons of the two different techniques.

My pen bleeds indigo blood,
Through paper skin blue rivers flow
Onto the pristine page they spill,
Like bluebells blossoming through snow.

My pen cries indigo tears,
From my third eye blue droplets seep
Into dark pools of ancient wisdom,
Ripples in an ocean deep.

My pen dreams of indigo moons,
Mystic orbs on midnight skies,
The inky feathers of a raven’s wing,
Glowing softly as she flies.

My pen weaves with indigo thread,
A cloak of stars for me to wear,
As I stir my precious potion,
Waiting for that gold so rare.

What do you think of the colour indigo? Did I capture it successfully in my poem?

One response to “I is for Indigo #AtoZChallenge”