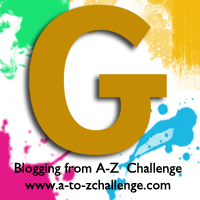 For the letter ‘G’ I have chosen the colour Gold- a warm, metallic yellow named after the precious metal. It is long associated with wealth and prosperity and extremely popular in fashion and jewellery. These Pinterest boards feature lots of beautiful golden imagery.

Keep reading to discover the symbolism behind this colour and learn more about the colour gold in Literature.

Gold represents glamour, luxury, class, elegance and extravagance. It also symbolises power, strength and solidity. As well as this, gold is a symbol of winning and success (eg. gold stars and gold medals). It represents the wisdom of ageing and the height of achievement, as in ‘golden anniversaries and ‘the golden age’ of civilisation.

Gold also has religious connotations of perfection and divinity and was often used in statues of deities, such as the Ancient Egyptian gods and goddesses. It features often in the Old Testament, and is given as a gift to Jesus in the nativity story. Gold can represent purity, for example in the saying ‘he has a heart of a gold’ and in the exchange of gold wedding rings. However, it is also associated with evil and idol worship.

In nature, gold represents the harvest (picture sheaths of wheat in the sunshine). The chemical symbol of gold, Au, comes from the Latin ‘aurum’, meaning ‘glow of sunrise’. It is often associated with the sun, and in the zodiac it is connected with the star sign Leo.

Because of its many figurative associations, the colour gold occurs frequently as a metaphor or symbol in literature, myth and legend. Here are some examples:

Can you think of any other examples of the colour gold in literature, myth and legend?

2 responses to “G is for Gold #AtoZChallenge”