Recently, my husband and I spent two weeks in Tenerife for our honeymoon. It was an amazing holiday. I’d never flown on a plane before, so I was quite nervous about that. But it was all fine, apart from experiencing aero-sinusitis (aka the feeling of a pickaxe stabbing my brain) as we descended. I thought I’d share some details and pictures of some of the places we visited on our holiday, in case my readers ever visit the island. This will be the first of two posts-the next one will be all about the local attractions.
We stayed with a very generous friend in a lovely place called Playa de San Juan (St. John’s beach) in Guía de Isora on the West coast of the island (see map below). 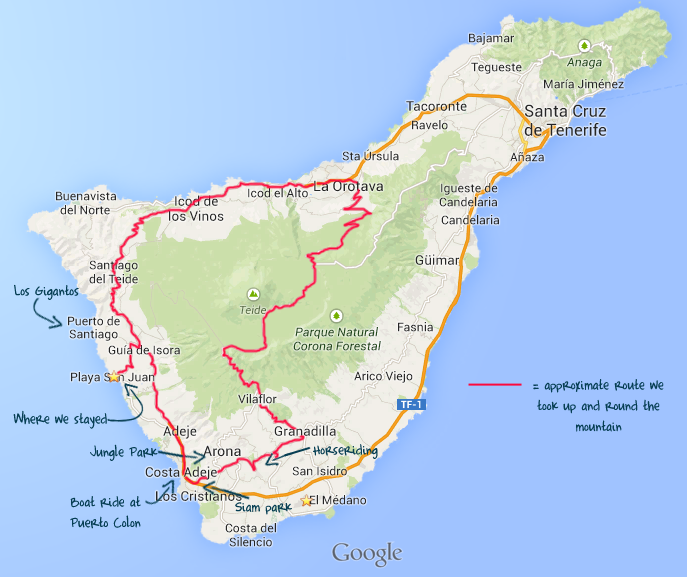 The beach was nice and not overcrowded. There were lots of sun loungers and benches under flowering canopies where you could sit in the shade. The sea and sky were a beautiful azure blue and the sun was always bright until around 8 or 9pm. We spent quite a bit of time swimming in the sea-which is sectioned off in front of where the fishing boats are-and it was very refreshing. I also saw lots of lizards hiding in the rocks around the beach. The only problem we had was how hot the sand was! The sand is quite dark due to it being a volcanic island so we had to hop from one patch of shade to another!

There are a LOT of all-you-can eat buffets in Tenerife at reasonable prices, as well as Spanish tapas restaurants and English-style pubs. Needless to say, I have put on quite a bit of weight! For our anniversary we went to a place near the beach called Marlin’s, which was very nice. We had Spanish omelette, Canarian potatoes and pizza. Another night we had a delicious dessert at a similar place near the beach-chocolate brownie with ginger and pineapple ice-cream! I also drank plenty of Sangria and had many lovely coffees. I really enjoyed the barraquitos-delicious liqueur coffee.
The best restaurant we went to was Churrasqueria Rodeo in Playa Fanabe for my 25th birthday. This is an all-you-can-eat with a difference, as waiters come and serve various barbecue meats straight to your table. My husband could barely keep up with the amount of meat they brought round-all different types and cooked in different ways. I’m a vegetarian and there was still plenty of food for me-a huge hot and cold salad bar which included different types of potatoes, noodles, pasta, mushrooms, onion rings and so on. All the food was delicious and we were stuffed by the end.

Just as I contemplated dessert I was surprised with an amazing birthday cake!

For the first week we stayed there (30th July-6th August) the San Juan and Virgen del Carmen Fiesta was going on. This a big celebration where a stage is set up near the beach and there is live singing and dancing until 6am most nights. There are also parades through the streets, talent contests, pageants, stalls, traditional music and fireworks. It was nice to be woken up on the morning of my birthday with a parade and fireworks!

I don’t speak much Spanish, so it was difficult to know exactly what the fiesta is all about, but I did pick up a bit of information. The Virgen del Carmen was once known as ‘Queen of the Seas’ and she is an important figure in fishing villages around Spain as she’s the patron and guardian of fishermen. Her statue is taken from the church down to the beach in a procession with a band and people carrying candles, then returned to the church after a fireworks display. We were lucky enough to stumble upon the procession at the right time and followed it down to the beach. The fireworks were amazing!
There was such a great atmosphere at the fiesta and it really made our stay special.
As you can see, Playa San Juan is a lovely place to be with such a great atmosphere. We really did have a fantastic honeymoon. Please pop back tomorrow for the next post about all the major attractions on the island.

Where did you go for your summer holiday or for your honeymoon?

« Click Me Quick (9)
Our Honeymoon in Tenerife Part 2: Local Attractions »

One response to “Our Honeymoon in Tenerife Part 1: Sun, Sea and Sangria”