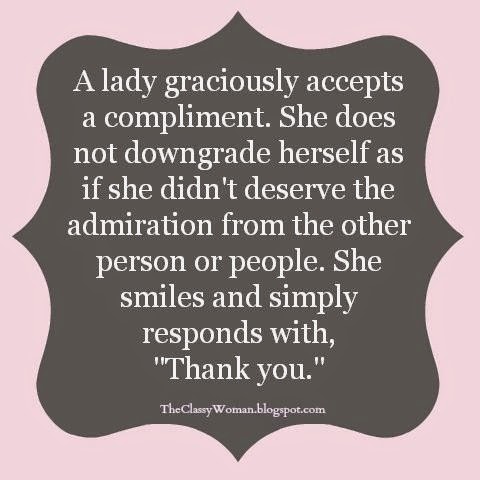 Today is Day 27 of the Self-Esteem Challenge, originally from Better than Dark Chocolate. It’s a series of questions and prompts to get you thinking about your good qualities and things that make you happy or proud. See my introductory post for more info.

Do you often accept compliments? If not, why?

In the past I found it very difficult to accept compliments, for a number of reasons. Firstly, I never believed them. I thought that people were just trying to be nice when they complimented me but they didn’t really mean it. Secondly, I thought that it might come across as vain or big-headed if I accepted a compliment-as if I was saying “Yes, I know I’m amazing!”.

As I’ve got older, I’ve learned to accept compliments more graciously. I now realise that when you reject a compliment by saying “I don’t think so” or “If you say so” or “No, I don’t” it can actually be quite offensive to the other person. You’re either saying they’re lying, unable to make a good judgement or that their opinion doesn’t count for anything. A compliment is a gift that the giver expects you will receive gratefully and they hope it will make you smile. To deny them that and refuse to accept their compliment is kind of rude.

You also damage your own self-esteem. You’re telling yourself that you’re not worthy of a nice comment from someone else. If you disagree with the compliment, at least accept that someone else has seen something good in you and that your perspective is not the only one that’s valid. If they’re normally honest when giving compliments to others, then why should you doubt them? I’ve also found that people can think your showing false modesty and that’s not an attractive trait.

I try to accept compliments with honesty and grace. I say something like “Really? I’ve been feeling insecure about that lately. Thanks for telling me,” or “that’s a really nice thing to say, thank you.” I still have to bite my tongue not to laugh in their face or argue with them at times, but I’m getting a lot better at it and it really has helped my self-esteem.

Are you good at accepting compliments?

« On the Link Between Depression, Comedy and Creativity
Fragile Destiny Blog Tour-Guest Post by Suzanne Lazear: In Which Noli Attempts to Interview V »