Welcome to the seventh part of a series of posts all about my wedding, with ideas, tips, inspiration and downloadable resources. Today I’d like to talk about the music.

We both listen to music from all genres and decades and love to sing and dance. As music is such an important part of our life, it had to be just right for our wedding so I started planning my choices quite early. 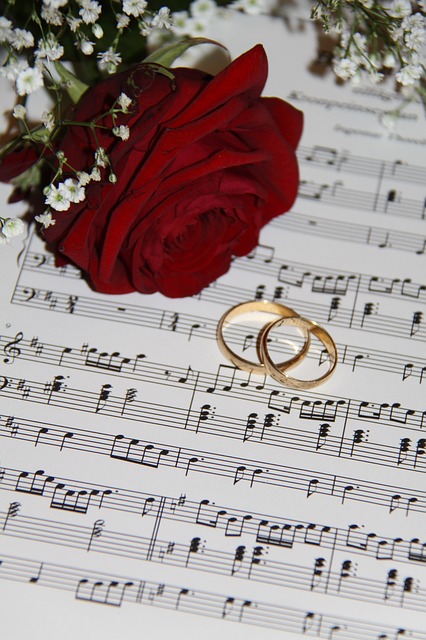 For background music as people filed in and took their seat, we played the classic wedding track ‘Pachelbel Canon in D’, which has always been a favourite. Then I walked down the aisle to ‘How Long Will I Love You?’ by Ellie Goulding. My paige boy, flower girls and bridesmaids went down at intervals, roughly every three lines of the song. It worked out perfectly so that my Dad and I stepped out just after ‘How long will I hold you?/As long as your father told you/As long as you can.’ and the music built up to a nice climax. It felt perfect and made me really emotional!

While we signed the register, they played ‘All of Me’ by John Legend. My husband picked this track specially, but it was new to me. In a rare soppy moment, he said that the lyrics summed up exactly how he felt about me. When I heard it I agreed it was perfect. I love the lines ‘You’re crazy and I’m out of my mind’ and ‘Love your curves and all your edges/All your perfect imperfections’.

The track we chose to walk back down the aisle too was ‘Tour of the Kingdom’ by Alan Menken, from The Little Mermaid. We’re both big Disney fans and The Little Mermaid is my favourite, so I wanted to incorporate that somehow without being too OTT. It worked really well because it’s such a joyful tune and only those that knew the film well recognised it.

For the evening do, we couldn’t afford a band so opted for a DJ instead. I sent him a list of tracks that we would like played in advance, and told him to mix it up a bit with other floor-fillers. It was mostly upbeat, happy tracks like ‘Walking on Sunshine’ by Katrina and the Waves and ‘Build me up Buttercup’ by the Foundations mixed in with modern pop. There was also plenty of 70s and 80s rocky tracks like ‘Summer of ’69’, ‘Living on a Prayer’, ‘White Wedding’, etc.

Our first dance was to ‘Rule the World’ by Take That. When I was at uni and we were first dating, we went to see the movie Stardust at the cinema and had a bit of a smooch to that song during the end credits, so it always reminds us of that newly loved-up feeling. We didn’t choreograph a whole dance routine, just a few steps and then we just winged the rest. It felt fun and natural that way.

I managed to get an impromptu dance with my Dad as well when ‘Walk of Life’ by Dire Straits came on. I just grabbed him and shoved him onto the dance floor so he had no choice, but I think he enjoyed it really.

After that, there were a lot of the usual party dances like ‘The Time Warp’ and the ‘Macarena’ and I was amazed that I didn’t fall over in my massive dress! I’ve never been snobby about disco music and have always enjoyed a good dance to fun, party music at weddings, so we embraced the cheese and had a wonderful time!

What would be your perfect music to walk down the aisle to? What party tracks would you insist are played at the reception?

« My Wedding (Part 6) Food and Drink (and of course cake!)
Charmed Vengeance Read-Along »