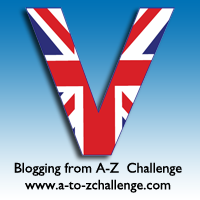 For the letter ‘V’ I have chosen Voting. I rarely delve into the realm of politics, but I’ve decided to give it a go.

There are two main types of voting systems in the UK: First Past the Post (FPTP) and Proportional Representation (PR). This BBC Bitesize article explains the differences quite well.

Anyone in the UK over the age of 18 can register to vote in UK elections and referendum. You can vote in person at a polling station, by post or by proxy. Find out more about how to register and vote here.

There is a lot of cynicism surrounding elections in the UK. Many people think that the voting system is unfair or fixed, or that all the political parties are so corrupt that voting is a waste of time. My Mum always told me I should never waste my vote because of what the Suffragettes went through to earn it for me, so I try to research as best I can and pick the best of a bad lot! At least if you’ve voted you can legitimately complain about who gets in.

Below is a very basic guide to the main political parties you can vote for in the UK:

A democratic socialist party that stands for the values of social justice, a strong community, reward for hard work and rights matched by responsibilities. They stress the importance of British membership of EU when it comes to big transnational issues such as climate change and security, but also pledge to ensure the EU delivers for British people on jobs, crime and prosperity. They are led by Gordon Brown, former Prime Minister.

“The Labour Party is a democratic socialist party. It believes that by the strength of our common endeavour we achieve more than we achieve alone, so as to create for each of us the means to realise our true potential and for all of us a community in which power, wealth and opportunity are in the hands of the many, not the few.”

A conservative and unionist party descending from the old Tory Party, founded in 1678. They were in government for two-thirds of the previous century and are currently in power. They focus on the social and ‘quality of life’ issues such as the environment, government services and schools and claim to be working towards mending ‘broken Britain’. The Conservatives back the EU but want to halt further political integration. The head of the party is David Cameron, the current Prime Minister.

The Liberal Democrats were formed in 1988 by a merger of the Liberal Party and the Social Democratic Party. The party leader Nick Clegg has urged Britain to “stand tall” and play its full part in the EU, which he says has a vital role on big issues such as climate change and security.

“The Liberal Democrats exist to build and safeguard a fair, free and open society, in which we seek to balance the fundamental values of liberty, equality and community, and in which no-one shall be enslaved by poverty, ignorance or conformity. We champion the freedom, dignity and well-being of individuals, we acknowledge and respect their right to freedom of conscience and their right to develop their talents to the full.”

The UK Independence Party was formed in 1994 by several members of the AntiFederalist League. UKIP’s main goals are for the UK to withdraw from the European Union and for a great reduction in immigration- a hot topic right now.

The Green Party is a growing political movement promoting social and environmental justice through campaigns, direct action and the electoral process. The Green Party manifesto sets out a plan for creating 1 million jobs through investment in renewable energy, housing, public transport and social care.

“We call this the Green New Deal – an approach to the economy that puts Britain firmly on the road to recovery, addresses the urgent climate crisis while improving the way we all lead our lives.”

The British National Party is a controversial party that formed as a splinter group of the National Front. A recent court case forced the party to change its constitution to accept non-white members when it was challenged in the courts on grounds of racial discrimination. The BNP opposes mass immigration and surrender to the European Union. They call for an immediate halt to all further immigration and the immediate deportation of criminal and illegal immigrants. The party exists to secure a future for the indigenous peoples of Britain. The leader of the BNP is Nick Griffin.

I’m not going to disclose my vote as I don’t want to get into a big political discussion on my blog, but I’ll give you a clue: it’s not the BNP (shudder).
Do you vote or do you think it’s a waste of time? Do you think the UK voting system is fair? If you started your own political party, what would it be called?

« U is for Union Jack
W is for Wildlife »