For the letter ‘U’ I have chosen Union Jack.

This is the UK’s national flag. It is based on the flag of Great Britain, which was created in the early 1600s when King James VI of Scotland inherited the English and Irish thrones. After the union of Great Britain and Ireland in 1801, the Union Jack was designed to represent all three countries.

It is a combination of three national flags:

The flag of England, known as the St.George’s cross (a red cross on a white background).

The Flag of Scotland, known as the St. Andrew’s cross (a white diagonal cross on a blue background).

The St. Patrick’s cross (a red diagonal cross on a white background) to represent Ireland. 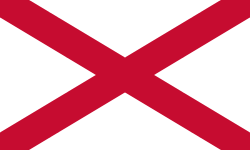 And here’s the final result:

Apparently the lack of any Welsh symbol or colours is because Wales was already a part of the Kingdom of England when the flag of Great Britain was created in 1606. I think it would look even better with a red dragon in the centre!

Do you like the design of the Union Jack or do you think it needs to be updated? What’s the story behind your country’s national flag?