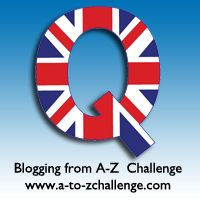 For the letter ‘Q’ I have chosen the Queen. Like Marmite, she seems to be a figure either adored or despised by the rest of the world. Most British people have more neutral feelings towards her. We celebrate the monarchy on occasions like royal weddings and jubilees as it’s a good excuse to have a party and we secretly enjoy all the pomp and ceremony. We also appreciate the tourism they bring to the country and the younger members of the royal family have become celebrities, but there’s a general consensus that they ‘don’t really do a lot’.

One of my favourite British comedians, Alan Davies, sums up our attitude towards the Queen quite well, in my opinion:

“Like all best families, we have our share of eccentricities, of impetuous and wayward youngsters and of family disagreements.”
“I have behind me not only the splendid traditions and the annals of more than a thousand years but the living strength and majesty of the Commonwealth and Empire; of societies old and new; of lands and races different in history and origins but all, by God’s Will, united in spirit and in aim.”

“My husband has quite simply been my strength and stay all these years, and I owe him a debt greater than he would ever claim.”

“To all those who have suffered as a consequence of our troubled past I extend my sincere thoughts and deep sympathy. With the benefit of historical hindsight we can all see things which we would wish had been done differently or not at all.”

“I cannot lead you into battle. I do not give you laws or administer justice but I can do something else – I can give my heart and my devotion to these old islands and to all the peoples of our brotherhood of nations.”

What do you think of the Queen?

One response to “Q is for the Queen”