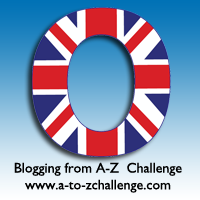 For the letter ‘O’ I have chosen Oak Tree.
The Oak tree is one of England’s national emblems, as it is the most common woodland tree in England. The symbol has appeared on the back of the pound coin in 1987 and 1992 and oak leaves or acorns are the emblem of the National Trust and The Woodland Trust. The oak tree is also the symbol of the UK Conservative Party. Before Christianity spread to Britain, there were sacred oak groves where Celtic druids met to hold rituals. To the druids, the oak represented doorways to other realms and was said to provide protection and power for their magick.

The oak is a common symbol of strength and endurance and many other countries, such as Germany, Cyprus, France, Romania, Latvia, Lithuania, Poland, Wales and the US have named it their national tree.

There are several oak trees with historic importance in the UK:

Here is a wonderful poem by Hanford Lennox Gordon:

Silence is the voice of mighty things.
In silence dropped the acorn in the rain;
In silence slept till sun-touched. Wondrous life
Peeped from the mold and oped its eyes on morn.
Up-grew in silence through a thousand years
The Titan-armed, gnarl-jointed, rugged oak,
Rock-rooted. Through his beard and shaggy locks
Soft breezes sung and tempests roared: the rain
A thousand summers trickled down his beard;
A thousand winters whitened on his head;
Yet spake he not. He, from his coigne of hills,
Beheld the rise and fall of empire, saw
The pageantry and perjury of kings,
The feudal barons and the slavish churls,
The peace of peasants; heard the merry song
Of mowers singing to the swing of scythes,
The solemn-voiced, low-wailing funeral dirge
Winding slow-paced with death to humble graves;
And heard the requiem sung for coffined kings.
Saw castles rise and castles crumble down,
Abbeys up-loom and clang their solemn bells,
And heard the owl hoot ruin on their walls:
Beheld a score of battle fields corpse-strewn–
Blood-fertiled with ten thousand flattered fools
Who, but to please the vanity of one,
Marched on hurrahing to the doom of death–
And spake not, neither sighed nor made a moan.
Saw from the blood of heroes roses spring,
And where the clangor of steel-sinewed War
Roared o’er embattled rage, heard gentle Peace
To bleating hills and vales of rustling gold
Flute her glad notes from morn till even-tide.
Grim with the grime of a thousand years he stood–
Grand in his silence, mighty in his years.
Under his shade the maid and lover wooed;
Under his arms their children’s children played
And lambkins gamboled; at his feet by night
The heart-sick wanderer laid him down and died,
And he looked on in silence.

Silent hours
In ghostly pantomime on tip-toe tripped
The stately minuet of the passing years,
Until the horologe of Time struck _One_.
Black Thunder growled and from his throne of gloom
Fire-flashed the night with hissing bolt, and lo,
Heart-split, the giant of a thousand years
Uttered one voice and like a Titan fell,
Crashing one hammer-clang, and passed away.

Did you enjoy the poem? What’s your favourite kind of tree and why?

3 responses to “O is for Oak Tree”