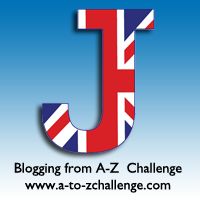 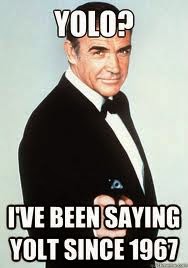 For the letter ‘J’ I have chosen James Bond. The James Bond films are based on twelve books by the British author Ian Fleming- who also wrote Chitty-Chitty-Bang-Bang! He based the character of James Bond on several secret agents and commando types that he met during World War II.

The 23 Bond films made by Eon are the longest continually running film series to date, as well as the second highest grossing film series-only beaten by Harry Potter. The first film was Dr. No starring Sean Connery in 1962. Since then, like Doctor Who, James Bond has been played by numerous other actors: George Lazenby, Roger Moore, Timothy Dalton, Pierce Brosnan and Daniel Craig. My favourite is Sean Connery, because he’s just awesome.

My favourite things about James Bond:

I love the James Bond theme music and was involved in a dance show a few years ago that featured several James Bond tracks. They definitely have that show-stopping effect and have received Academy Award nominations on several occasions. My favourite songs are Live and Let Die, Goldfinger, Diamonds are Forever and Skyfall.

Bond gets to drive an array of beautiful classic and modern cars-an Aston Martin V8 Vantage, a V12 Vanquish, a Lotus Esprit, a BMW Z3 and Z8, to name a handful. His most famous car is the silver Aston Martin DB5, which was first seen in Goldfinger, but also appeared in Thunderball, GoldenEye, Tomorrow Never Dies, Casino Royale and Skyfall. I think it’s gorgeous!

It had a homing beacon display on the dashboard, a tire slasher on its rear hubcap, bulletproof windows, a rear spout to spill oil, another to blast a smokescreen, and machine guns up front. Plus, there was an ejector seat for the passenger side if you needed to get rid of unwanted company.
~Jordan Hoffman [Source] 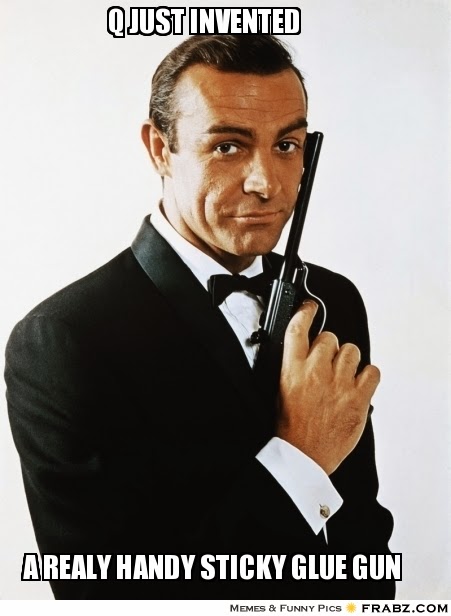 Q branch provides Bond with a range of super spy gadgets such as an autogyro, a jet pack, car invisibility cloak, laser watch and an exploding attaché case. There are also some very odd gadgets like the spiked umbrella, robot dog, bagpipe flame-thrower, crocodile vessel and seagull snorkel suit!

I adore the fierce, no-nonsense M, who always puts Bond in his place and maintains an air of dignity whatever the situation. She is expertly played by Dame Judi Dench-a woman born for the role. My favourite scenes featuring M are from the latest film, Skyfall, in which her life is threatened and she is confronted by demons from her past.

Bond villains are usually straightforward baddies with an evil plot for world domination or destruction, but many of them have become memorable and iconic characters, frequently alluded to or parodied in other works. I like the creepy ones best-Le Chiffre with his weird eye, Jaws with his freaky metal teeth and Ernst Stavro Blofeld, the evil genius with the fluffy white cat.

His Attitude Towards Women 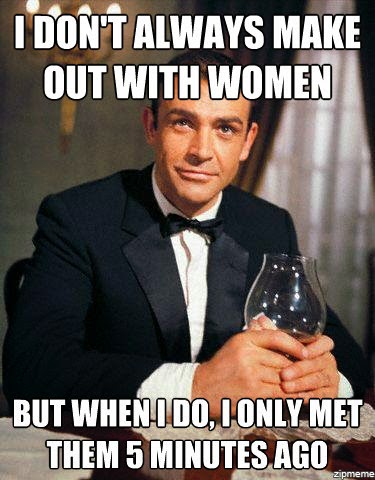 As we’ve seen, James Bond films have a certain winning formula: lots of action and explosions, neat gadgets and classic guns. This parcel also includes lots of attractive women who throw themselves at Bond’s feet. Bond normally seduces several women in a single film before moving on to his next adventure/conquest without looking back, which makes him seem pretty sleazy. He’s traditionally an all-action guy with little emotion-which makes him brilliant as an MI6 agent as he can assassinate people without any complicated baggage, but he’s not exactly a nice guy.

Having said all that, the recent films starring Daniel Craig have tried to paint Bond as a more sensitive character and show his softer side. He’s grieving for a woman he lost, shows remorse for some of his actions, has a close bond and respect for M and is haunted by a difficult childhood. He’s being presented as a more realistic and well-rounded character, which I think now helps him appeal to a wider audience.

Sometimes I really struggle to understand the ins and outs of the plots-especially all the political bits. When we went to see Quantum of Solace at the cinema, I was constantly having to ask my other half who was who, much to the annoyance of everyone else in the cinema. Read the plot here and see if you can get your head round it. Maybe it’s just me.

My other issue with the plot is of each film is how far-fetched it is. Bond can survive almost any injury and leap from huge heights without being harmed. It really made me laugh in Casino Royale when he got poisoned and tried to use a defibrillator to revive himself, and then his girlfriend turned up and knew exactly what to do.

So mostly I just ignore the plot holes and just enjoy James Bond for what it is-a thrill ride!

Are you a fan of James Bond? Which movie or actor is your favourite?

3 responses to “J is for James Bond”