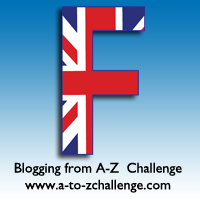 We’re already onto the second week of the A-Z Blogging Challenge. The aim is to write a post for every day of the month except for Sundays, with each post representing a different letter of the alphabet. This year I’m doing an A-Z of Great Britain, covering as much as I can about British music, literature, TV and film, food, wildlife and culture.

For the letter ‘F’ I have chosen one of my favourite British delicacies- Fish and Chips. Well, actually I’m vegetarian so I don’t have the fish these days, but still. It’s a classic.

Deep-fried fish was introduced to Britain by Jewish refugees from Portugal and Spain during the 16th century. It became a stock meal for the working classes during the 19th century, following the development of trawl fishing in the North Sea and railways connecting the ports to major cities, which meant fresh fish could be easily transported. The first fish and chip shop was opened in 1860.

Now most towns and large villages in Britain have a fish and chip shop (a ‘chippy’) where you can buy fish and chips for an average of £3.30 (£5 in London!). It’s normally a large piece of deep fried, battered cod (though you can order Haddock, Plaice and other fish) with large, thick cut chips.

Hopefully you’re aware that I’m not talking about ‘potato chips’. We call those crisps. Makes sense, since they are crispy n’all. Chips are similar to fries, but not as long and skinny. ‘Proper’ British chips are thick rectangles of potato-perfectly crispy on the outside and fluffy in the middle. It’s the ultimate in comfort food. You can see how it evolved in the miserable, cold weather of the UK as a treat to warm us up!

Fish and chips always used to come wrapped in newspaper with a little wooden fork, though this is less common now. The classic way to eat them is with mushy peas and covered in lots of salt and vinegar, but mayo, gravy or tomato ketchup are often used as well. Some of my fondest memories involve eating fish and chips fresh out of the paper, sitting in a car with my parents while it was pouring with rain outside and the windows were fogging up. I recommend getting chips from a proper seaside town like Scarborough, Whitby or Blackpool for the full experience.

It’s definitely not a meal for the health conscious-it’s very fatty and greasy and about a billion calories. But it’s a very cheap meal and a nice treat when you can’t be bothered to cook. If you don’t mind having a go yourself, there are some pretty good home recipes:

And now, as we Brits delight in puns, I present for your amusement a list of actual, real fish and chip shop names:

Are you a fan of fish and chips? How do you eat yours?

« E is for Etiquette
G is for Glossary »

11 responses to “F is for Fish and Chips”