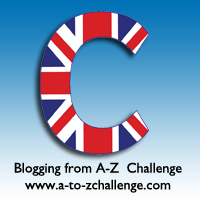 Today is the third day of the A-Z Blogging Challenge! The aim is to write a post for every day of the month except for Sundays, with each post representing a different letter of the alphabet. This year I’m doing an A-Z of Great Britain, covering as much as I can about British music, literature, TV and film, food, wildlife and culture.

For the letter ‘C’ I have chosen Cadbury.  Cadbury is the leading chocolate manufacturer in the UK.

The company was established in Birmingham way back in 1824 by John Cadbury, who started by selling tea, coffee and drinking chocolate (which he prepared with a pestle and mortar) with his brother and two sons. You can see the Cadbury’s timeline here. Their most famous products are Cadbury Dairy Milk (a classic bar), Creme Eggs (amazing gooey fondant covered with chocolate) and Flakes (no icecream is complete without one).

I have to say that there’s nothing quite like Cadbury’s chocolate. Nestlé chocolate is a little too sugary for me and Galaxy, although deliciously creamy, can get sickly after a while. American brands like Hershey’s don’t really do it for me. I think it’s because the flavour is so different from what I associate with British chocolate-it seems less sweet. High end, luxury brands like Green&Blacks and Hotel Chocolat offer the finest quality, but Cadbury’s is better value and it’s usually the brand I turn to to satisfy my cravings.

So what makes Cadbury’s chocolate so special? Well, the company originally claimed to include ‘a glass and a half’ of milk in every half pound bar of chocolate. The politically correct version is now: ‘The equivalent of 426ml of fresh liquid milk in every 227g of milk chocolate’. As well as this, Cadbury chocolate contains more cocoa solids (23%) than brands like Hersheys (11%). In the UK, chocolate has to contain at least 20% cocoa solids, while in the US it only has to contain 10%. Hersheys also contains more sugar and the additive PGPR in place of cocoa butter. But Cadbury’s chocolate contains its fair share of nasty chemicals and I suppose you prefer whatever you’re used to! This BBC article explains more about the differences between British and American chocolate.

Recently Cadbury has been acquired by the American company Kraft Foods. This sparked some outrage from the British public who were not only worried about job cuts (quite rightly) but also feared that their beloved, nostalgic chocolate would be Americanised. To a certain extent it has been-we now have some very weird flavours like ‘Cola Pretzel Honeycomb’ (what in the world?!), but overall I think the changes are fun and nothing to worry about. Besides, things are always changing and even chocolate has to move with the times.

What do you think of Cadbury’s chocolate?

22 responses to “C is for Cadbury’s Chocolate”