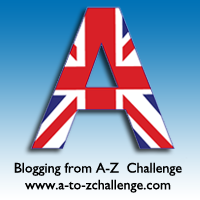 Today kickstarts the A-Z Blogging Challenge! The aim is to write a post for every day of the month except for Sundays, with each post representing a different letter of the alphabet. This year I’m doing an A-Z of Great Britain, covering as much as I can about British music, literature, TV and film, food, wildlife and culture.

For the letter ‘A’ I have chosen to write about Authors.
There are many wonderful British authors, such as J.R.R Tolkien, Roald Dahl, Charles Dickens, Sir Arthur Conan Doyle and the poet Philip Larkin, to name a few.

I was originally going to do a top ten list, but the post was going to end up way too long so I decided to do a top five. So here are my top five favourite British authors:

Good old Bill gets the top spot because of both the quantity and quality of his work. It’s believed that he wrote around 37 plays, 5 long narrative poems and 154 sonnets. His plays are based on some of our deepest human emotions- from the insatiable thirst for power and knowledge to the agony of forbidden and unrequited love. They are filled with memorable, compelling characters and a mixture of both tragedy and hilarity.

He illuminates human experience so perfectly (such as in passages such as Hamlet’s ‘to be or not to be‘ soliloquy and the ‘seven ages of man‘ speech from As You Like It), that his work is alluded to again and again in literature, film and TV. For example, The Lion King is loosely based on the plot of Hamlet, Ten Things I Hate About You is based on The Taming of the Shrew and West Side Story on Romeo and Juliet.

Shakespeare is also known for his ability to turn a phrase. It’s thought that he invented over 1700 common words that we still use today! On Quoting Shakespeare by Bernard Levin sums it up perfectly. So for me, Shakespeare deserves to come top.

Orwell is the king of political fiction. I was fascinated with his essays during university and disturbed by his haunting novella, Animal Farm-a political allegory in which animals take over a farm and enslave their human keepers. They create a hierarchy of animals based on intelligence and level of domestication, with the sinister pigs at the top indulging in luxuries (representing the government) and the horses and goats at the bottom doing all the hard work (representing the working class).

But Orwell is best known for his dystopian novel Nineteen Eighty Four. Orwell’s vision of the future, where 24 hour surveillance is the norm and even thinking about breaking the rules is a crime, is an extreme version of our own society. We have even incorporated phrases from the novel, such as ‘Big Brother’, ‘Room 101’, ‘Thought Police’ and ‘Newspeak’ into our regular vocabulary. Nineteen Eighty Four has inspired numerous dystopian novels and films, such as V for Vendetta and Minority Report.

Charles Lutwidge Dodgson, (better known as Lewis Carroll), is famous for his fantastical imagery and humorous wordplay. His nonsense poems, such as Jabberwocky and The Hunting of the Snark, as well as the beloved children’s tales Alice in Wonderland and Through the Looking Glass are loved by both adults and children alike. Alice in Wonderland can be read as a coming- of-age story for a child confused by the contrary adult world she finds herself in, something most of us can relate to! The imagery Carroll used has been hugely influential in the fantasy and sci-fi genre and can be seen in everything from LOST to The Matrix. It has also inspired many recent YA novels, such as Splintered by A.G Howard.

C.S Lewis’ most well-known work is the children’s fantasy The Chronicles of Narnia, much of which is based on Christian symbolism. It appeals to me because I like the idea of magic existing in the most unlikely of places-even a wardrobe. The innocent belief in goodness and magic possessed by the children (particularly Lucy), reminds us of what we miss out on by becoming sceptical and cynical adults. I’ve always loved the wise mentor figure of Aslan the lion and the exciting stories of battle. Narnia remains one of my favourite fantasy worlds.

I couldn’t do a top British authors list without mentioning J. K. Rowling! Harry Potter is one of my favourite series ever. It has everything- danger, excitement, humour, romance, mystery and magic. It promotes the values of bravery, loyalty, honesty and friendship, as well as tackling political and social issues, such as equality.

Rowling’s world has captured the imaginations of many adults as well as children, probably because of the extensive references to mythology that she weaves into the story and the intricate way she plots her novels down to the very last detail. Everything from character names to seemingly insignificant references has a symbolic meaning and a back story which often become important later. Rowling always keeps you guessing. It’s not always easy to see where characters’ loyalties lie so there is usually a big twist at the end of each novel that I never saw coming!

I could go on and on about Harry Potter all day, but I won’t as I’m probably preaching to the converted.

Who is your favourite British author and why?

« A-Z Challenge Theme Reveal!
B is for Bands »

12 responses to “A is for Authors”