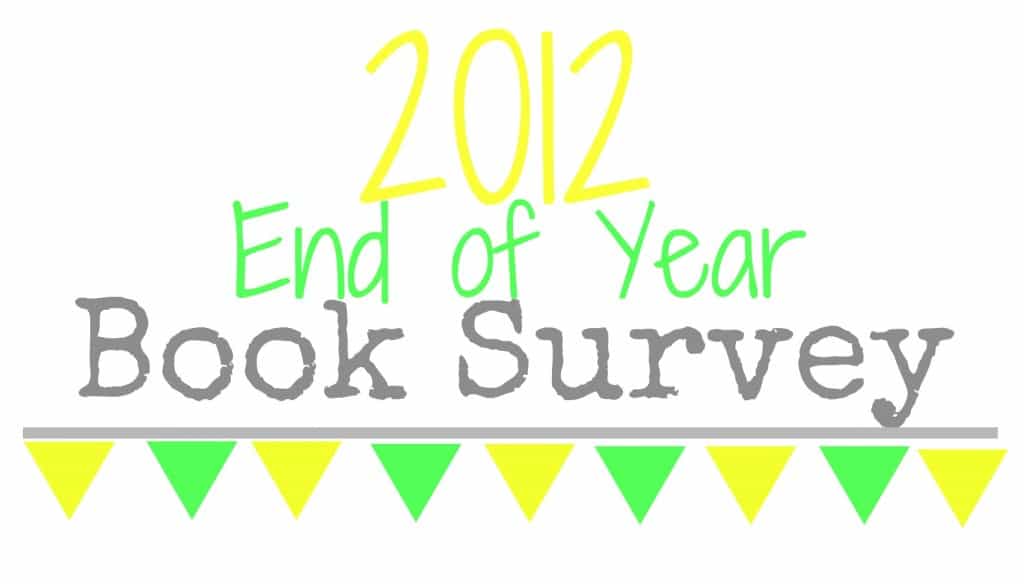 As I love doing question and answer memes, I thought I’d join in with the End of the Year Survey hosted by The Peppetual Page Turner. Feel free to visit the blog and sign up with Mr. Linky to share your survey with others on the list. If you do so by January 10th you’ll be entered to win a book of your choice from someone else’s list!

1. Best Book You Read In 2012? (You can break it down by genre if you want)
It’s between Daughter of Smoke and Bone by Laini Taylor, Mockingjay by Suzanne Collins or Divergent by Veronica Roth. I loved them all for different reasons.

2. Book You Were Excited About & Thought You Were Going To Love More But Didn’t?
City of Bones by Cassandra Clare. I’d seen so many blogs raving about it, and my friend recommended it to me. It was a pleasant read, but it didn’t particularly thrill me. All the right ingredients were there, so I’m not sure why it didn’t grab me as much as some other YA novels I read this year.

3. Most surprising (in a good way!) book of 2012?
Shiver by Maggie Steifvater. I wasn’t sure if I would like it as it looked very Twilight-esque but I actually really enjoyed it and was suprised that the heroine wasn’t a damsel in distress type.

4. Book you recommended to people most in 2012?
Probably The Hunger Games. It seemed to be late in taking off here in the UK, so a lot of my friends and family hadn’t heard of it until the movie came out. I think I helped convert a few people.

5. Best series you discovered in 2012?
Again its between The Hunger Games, Divergent and Daughter of Smoke and Bone.

6. Favorite new authors you discovered in 2012?
There are so many! If we’re talking debut authors I would say Gennifer Albin (author of Crewel) and Jessica Khoury (author of Origin).

7. Best book that was out of your comfort zone or was a new genre for you?
Every Dead Thing by John Connolly. This was an adult crime thriller, so very different from my usual YA fantasy/paranormal/sci-fi. It was very gory but an absoloute page turner and so skillfully crafted.

8. Most thrilling, unputdownable book in 2012?
Mockingjay or Divergent. Both kept me up all night reading.

9. Book You Read In 2012 That You Are Most Likely To Re-Read Next Year:
Hmm, I don’t tend to re-read books so soon, so it’s hard to say. Possibly I’ll revisit Insurgent before the next one comes out.

11. Most memorable character in 2012?
Karou from Daughter of Smoke and Bone. She’s so unique-funny, arty, rebellious.

12. Most beautifully written book read in 2012?
It’s a tie between Daughter of Smoke and Bone and Every Dead Thing. Both contained some beautiful poetic imagery.

13. Book that had the greatest impact on you in 2012?
It has to be Mockingjay. The ending was so true, so shocking, so devastating.

14. Book you can’t believe you waited UNTIL 2012 to finally read?
The Hunger Games. I was slow to catch on to this series, but now I’m obsessed with it.

“She craved a presence beside her, solid. Fingertips light at the nape of her neck and a voice meeting hers in the dark. Someone who would wait with an umbrella to walk her home in the rain, and smile like sunshine when he saw her coming. Who would dance with her on her balcony, keep his promises and know her secrets, and make a tiny world wherever he was, with just her and his arms and his whisper and her trust.”

***
“The streets of Prague were a fantasia scarcely touched by the twenty-first century—or the twentieth or nineteenth, for that matter. It was a city of alchemists and dreamers, its medieval cobbles once trod by golems, mystics, invading armies. Tall houses glowed goldenrod and carmine and eggshell blue, embellished with Rococo plasterwork and capped in roofs of uniform red. Baroque cupolas were the soft green of antique copper, and Gothic steeples stood ready to impale fallen angels. The wind carried the memory of magic, revolution, violins, and the cobbled lanes meandered like creeks. Thugs wore Motzart wigs and pushed chamber music on street corners, and marionettes hung in windows, making the whole city seem like a theater with unseen puppeteers crouched behind velvet.”
~Laini Taylor, Daughter of Smoke and Bone

“For a moment they still lived and I experienced their deaths as a fresh loss with each waking, so that I was unsure whether I was a man waking from a dream of death or a dreamer entering a world of loss, a man dreaming of unhappiness or a man waking to grief.”
~John Connolly, Every Dead Thing.

17. Book That Had A Scene In It That Had You Reeling And Dying To Talk To Somebody About It? (a WTF moment, an epic revelation, a steamy kiss, etc. etc.) Be careful of spoilers!
Mockingjay had a stunning ending I really wanted to reveal.

18. Favorite Relationship From A Book You Read In 2012 (be it romantic, friendship, etc).
I liked the romance between Karou and Akiva in Daughter of Smoke and Bone (I also like Karou’s relationships with Zuzanna and Brimstone), and in The Hunger Games I liked the love triangle but especially the sisterly relationships between Katniss and Prim or Rue.

19. Favorite Book You Read in 2012 From An Author You Read Previously
All the authors were new to me this year.

20. Best Book You Read That You Read Based SOLELY On A Recommendation From Somebody Else:
Every Dead Thing. This was recommended by my Mum, who has excellent taste in books.

1. New favorite book blog you discovered in 2012?
I really like Chapter by Chapter. It has a beautiful layout and such interesting posts.

2. Favourite review that you wrote in 2012?
Mockingjay review. Beware of spoilers!

3. Best discussion you had on your blog?
I had lots of great advice on my Insecure Writer’s Support Group post from July.

4. Most thought-provoking review or discussion you read on somebody else’s blog?
‘Some Thoughts About Gender in YA Dystopias’ by Crunchings and Munchings.

7. Most Popular Post This Year on Your Blog (whether it be by comments or views)?
My 2nd Cover Characterisitc post got the most views and I think Writer’s Platform Building Campaign got the most comments (30).

9. Best bookish discovery (book related sites, book stores, etc.)?
I finally joined Goodreads at the start of the year, so glad I did!

10. Did you complete any reading challenges or goals that you had set for yourself at the beginning of this year?
I managed the Mini YA reading challenge (13/12 YA novels) and Level I of the Book Blogger Recommendation Challenge (8/5 books). In total I read 16 novels, which is nearly double what I read last year, so I’m happy with that.

3. One Thing You Hope To Accomplish Or Do In Your Reading/Blogging In 2013?
I’d like to be more active in commentating on other people’s blogs and starting discussions on my own blog. I’d also like to get more book reviews posted and to read some of the books that have been on my shelf for a long time before I buy any new ones (major self control needed).

Phew, that’s it! What do you think of my answers? Feel free to add the link to yours below.