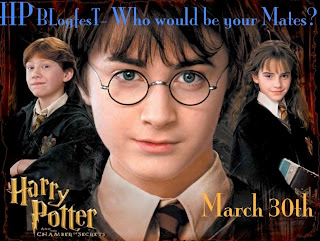 Yep, I’m doing another blogfest today! (Scroll down if you want to see the Lost and Found Blogfest). Not that I have time for all these blogfests, but I couldn’t really resist a Harry Potter blogfest now, could I? Especially not one organised by the HP mad Michael Di Gesu. I’m afraid my entry was rushed, but here goes anyway.

The aim of the game was to choose which two HP characters would be your best mates at Hogwarts and write about why and what sort of trio you would be. Well, to be honest my first thought was that it would be pretty hard to improve on Ron and Hermione. Ron would make me laugh and Hermione and I are both bookish and could discuss classes together. But if I think about it properly Ron would probably bore me after a while as we wouldn’t really have anything in common apart from both being really poor, and Hermione and I would probably always be competing to be top of the class. Luna and I would get along great, but we would be too alike (both being blonde, daydreamy types). In the end I settled on Fred and George.

The Weasley Twins are many people’s favourtie characters and there’s good reason. Not only are they hilariously funny but they’re also brave, loyal, cunning and much cleverer than Molly Weasley makes out. I would enjoy their hilarious annecdotes all day. Despite having to attend boring classes like Arithmancy and Ancient Runes, there would never be a dull moment with those two around dropping stink bombs. If I was feeling down they would be sure to make me smile again with a stupid prank. It would be a great dynamic because, being the only girl, I would be able to hog all their attention and relish my feminine role in the group. I would never be short of dates for the Yule Ball, or advice on the opposite sex. The teachers wouldn’t mind us hanging out together because they would suppose (me being a bookish type) that I would exert a positive influence over them, but how wrong they would be. I would love to help Fred and George think up fun new practical jokes and tricks for Weasley’s Wizzard Wheezes, and  to use the Marauder’s Map to sneak around Hogwarts discovering secret passageways. I’d be able to enjoy all the mischief without anyone suspecting that I could possibly be involved-they would always get the blame! Although they’re not the academic type I’m sure we could come to some sort of arrangement whereby I do their homework for them in exchange for copious amounts of Honeyduke’s sweets. I’d also get to hang out at the Burrow during the summer holidays enjoying Molly’s magnificent meals and getting to know Ron, Harry and Hermione. So being mates with Fred and George would be a win win situation!

Now I’m off to Michael’s blog to check out all the other great entries.

« Lost and Found Blogfest: Thoughts on Depression
A-Z Challenge: A is for Anger »

8 responses to “HP Blogfest…Who Would be Your Mates?”