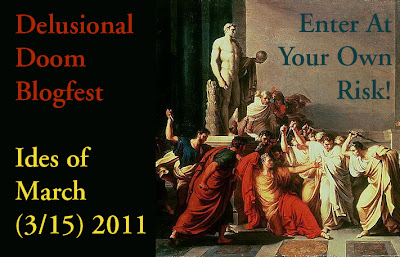 Today is March 15th, also known as the Ides of March. It’s the day Julius Caesar was killed in 44 B.C and in Shakespeare’s play Julius Caesar, he is warned to “beware the Ides of March”. It is an appropriate date then, for Hart Johnson to host her Delusional Doom Blogfest.The idea is to do any of the following:
a) Predict your own death
b) Predict someone else’s death
c) Write your own obituary
d) Write someone else’s obituarye) Plot a murder of someone sorely asking for it, step by step.

The only requirement is that the death must be ‘either very strange, unusual, bizarre…conspiratorial… or that the reporting be entertaining’.

I’m a great fan of the morbid and they are all really interesting topics, but I’ve decided to combine a) and c).

Anstice V. Brown (nee Potts), an author famous for writing young adult paranormal, fantasy and sci-fi novels died on Saturday, which, due to a cruel twist of fate happened to be her one hundreth birthday.

Anstice is reported to  have drowned in a vat of molten chocolate during a visit to a Thornton’s chocolate factory. It is believed that she was attending a tour of the newly opened factory in celebration of her birthday when the accident took place. Eye witnesses claim that Anstice was very interested in the chocolate making process and had climbed on to the edge of a vat of chocolate to get a better look, but couldn’t resist trying to reach in and grab some of the chocolate. It was at that point that she tumbled into the vat.
“She was just swirling round and round in the chocolate”, claims Kevin Woods, 42. “It must have been boiling hot, but she didn’t seem that bothered. In fact, she looked delighted and was still eating the chocolate with a big smile on her face as she disappeared beneath the surface.”

Born in Boston, England on 30th July 1989, Anstice (known by her friends as Tizzy) began writing at primary school and later turned her hobby into a full time profession, penning bestsellars such as the Wild Spirits trilogy and several poetry anthologies. Although her parents divorced when she was a child, she grew up in a big family with her talented half siblings Shana-Lee Neal (the owner of celebrity hair salon ‘Punked’), Joshua Potts (once famous comedian and regular on ‘Mock the Week’) and Millissa Potts (famous for her Broadway and Westend roles). Her love of literature led her to pursue a degree in English and Philosophy, and she graduated with First Class Honours in 2011. Two years later she married her partner of six years, art teacher Matthew Brown, and they went on to have three children: Jacob, Stephanie and Charlie. Shortly after the birth of her first child she secured a publishing contract with Harper Teen and her career as a writer took off. She saw seven of her books published, and one, Roar of the Blood, turned into a film. During her later life Anstice kept very active and benefited from recent scientific research into delaying the ageing process. She liked to cycle, dance and swim and travel the world with her husband. She donated generously to charity, rescusing many abandoned animals and  she continued to write up until her death.

Anstice’s family, who were with her when the accident happened, are understandably very shocked and upset by this tragedy but are handling it very well. “We’re just glad that she died in the way that she would have wanted”, says her daughter Stephanie-Rae, aged 70. “Mum loved chocolate-after writing it was her favourite passion, so she died doing something she loved. She would have been happy that she made it to one hundred as well, I know she wanted that telegram from the Queen, and luckily it arrived this morning, just in time.”
“She had a good life,” her son Jacob, aged 75 agreed. “All she ever wanted was to be a writer and have a family and she achieved them both. She got to see her great-grandchildren grow up and saw most of her writing published. I know she was very happy.”

A public memorial service for Anstice is being held on the 10th August at St.Boltoph’s church, Boston, Lincolnshire. Her family insist that anyone who knew her or was inspired by her work are welcome to attend and they promise that there will be a ‘mind-blowing’ buffet, including a ten foot chocolate cake made in her honour. Mourners are requested to wear white.

« Share the Birthday Love Blogfest: Do girls want to read books with a male protagonist?
Lost and Found Blogfest: Thoughts on Depression »