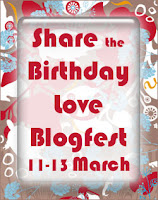 This weekend, Sari Webb is hosting a Share the Birthday Love Blogfest to celebrate turning 24 (congratulations Sari!).  If you haven’t entered get on over there and do so because it’s really easy to take part and there are some fab prizes on offer including a choice of three awesome books and a WiP critique by Sari. You can choose whether to enter the blogfest or the competition or both, and I decided to do both. For the blogging part, the idea is to post about something you need help with on your writing that you think other bloggers can help with. One thing springs to mind straight away for me.

As you may or may not know, my current WiP is a YA paranormal adventure/romance. The plot and characters are sorted and things are going well, but now I’m faced with a dilemma: should my protagonist be my main male character or my main female character? By protagonist I mean the main character that the narration is focused on. I haven’t decided whether it will be in first person or third person yet, but either way it will be from either his perspective or her perspective. The male character is the one that undergoes the biggest transformation in my novel-he is the one that is knew to the fantasy world and has to make discoveries as he goes along, which is why I originally wanted the story to be seen through his eyes. The female character is portrayed as somewhat mysterious and I don’t think this would come across if the story was from her perspective. However, I’ve noticed that the majority of YA fiction, particularly paranormal romances are centered around female characters (eg. Twilight, Graceling, The Hunger Games, Paranormalcy). This is probably because more girls read this genre than boys, and they want to be able to relate to the main character. So now I’m struggling to decide whether to stick with my gut instinct and keep my male character as the protagonist, or to try to shift it so it’s from the female character’s perspective (which might mean having their roles completely reversed) to make it appeal to the target audience. A third possibility is to have it alternate from one to the other.

So, what do you guys think? Do girls want to read books with a male protagonist?

13 responses to “Share the Birthday Love Blogfest: Do girls want to read books with a male protagonist?”