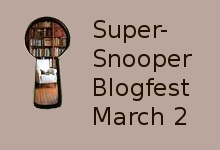 Today I’m writing for Alison Stevens’ Super-Snooper Blogfest. I’m ashamed to say I wasn’t at all on the ball with this one and despite signing up weeks ago I only got around to writing my entry today. In fact I wrote it hastily in my lunch break at work, so I apologise in advance for the sloppy writing, but better late (and sloppy) than never, right? The main thing is I enjoyed writing it and I hope you will too. The brief for the blogfest was to describe a setting that tells the reader something about your character’s personality. I’ve chosen a character from my current WiP, but I won’t tell you any more than that or it’ll spoil the fun.

The entrance was hidden from view by the browning creeper vines overhanging the rock face like a faded net curtain. If you didn’t know what you were looking for it was impossible to find; it was almost as well camoflaged as its owner. It was the scent that gave it away: a rich, musky aroma permeating the rocks and shrubs around it. It was a primal smell, reminiscient of burning firewood, animal fur and warm spices. The opening was just wide enough for a human to crawl through on all fours, scuffing their knees in the dirt as they clambered through.

As they emerged from the tunnel, their eyes would be greeted with the amber glow of warm embers, providing just enough light to illuminate the ground beneath them and cast dancing shadows across the walls. Their bare feet would meet the soft texture of animal skins, a welcome relief from the rough floor of the tunnel. A rusty, salty smell would meet their nostrils, mingling with the spicey scent that had lured them in. If they cast their eyes to the bones littering the cave floor, they would understand where it had come from. Perhaps it would be enough to convince them that the cave belonged to a savage beast that did not want disturbing.

But if they were brave enough (or stupid enough), they might explore the cave further. They might hold a torch up to the walls and marvel at the colourful chaos daubed upon them: dark faces with wild eyes, a lioness crouching in the long grass, a leopard watching from a lush treetop. Stick figures they were not-they moved and growled and breathed like living things. Curious as to who had painted such beautiful scenes, the intruder might begin to search the cave for more clues. Pulling aside the layers of animal furs at the back of the cave, they would discover something that looked most out of place in this primative setting: a small wooden jewellry box with tiny flowers carved into the lid. If they opened the delicate box and peeked inside, they would see the most beautiful necklace they had ever laid eyes on: a brilliant and captivating amber stone hanging on an ornate silver chain. Should they dare to touch this treasure, however, they would be sure to hear the sudden crack of a twig behind them, followed by hot breath on the back of their neck. They would try to turn, to run, to cry out-but it would be too late. She would claim her prey.