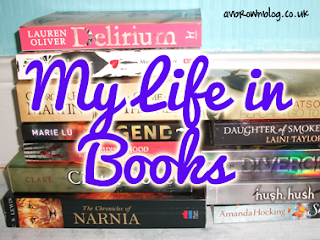 Today I read a really great post by Philip Dodd over at The Domesticated Bohemian.  He described how his early love of reading was sparked by pouring over a children’s encyclopedia and grew from discovering the library. He argues against their closure and I agree that if a library encourages even one child to enjoy reading then it’s worth keeping open, it’s just a shame that many people do not take advantage of the wealth of information and entertainment on their doorstep.

Philip asked his readers to tell him about their reading lives including what books were important and why. This was such an interesting idea that I decided to write a whole blog post about it rather than just comment. So here goes.

It was my Mum that first encouraged me to read. According to my Mum, I learnt to read so quickly as a result of spending so much time on the ‘naughty chair’ where the only thing I was allowed to do was read a book. By the time I started primary school I already enjoyed reading. We had a lot of books in our house, both fiction and non-fiction and I was allowed to read them in bed before going to sleep. There was a fantastic picture book that simplified the plots of Shakespeare’s plays with cartoon commentary, a poetry anthology called ‘Plum’ by Tony Mitton and a few Spike Milligan anthologies which I adored. There were also many different reference books to pour over, which I loved to use for school projects. Mum also used to order me books from our school book club catalogue. I started collecting the Horrible Histories books, and by the time I was eleven I had about 20. They were full of interesting facts that I could suprise my teachers with and I loved the cartoons that accompanied them. I also used to collect the ‘Where’s Wally?’ geography magazines that came with special binders. It’s safe to say I wouldn’t have been at all interested in geography without them. My favourite novel was Roald Dahl’s Danny, Champion of the World but I also used to read a lot of Jaqueline Wilson books. I remember picking Harry Potter and the Philosopher’s Stone of the shelf at school one day and struggling so much with the first chapter that I put it back. It was only when there was talk of it being made into a film that I gave it another chance, and my life long love of Harry Potter began. I still read it now, and it still inspires me.

At high school I was introduced to the classics, modern and post-modern fiction. My favourites were Great Expectations, Hamlet, Frankenstein, Brave New World, One Hundred Years of Solitude, Nineteen Eighty Four, The Picture of Dorian Gray and the poetry of Philip Larkin, William Blake and T.S Elliot. I absorbed it all, analysed it, critiqued it and adored it. I realised that literature could transcend amusement to become something much more: an imprint of life. It could capture the emotions of anger, happiness, pain and grief and even the dull monotony of human existence and turn them into something beautiful that stayed with you forever. I was grieving for my Grandad  at sixteen years old and struggling to come to terms with my own mortality, when my English teacher lent me Jonathon Livingston Seagull and suddenly everything made sense.

At university I delved even further into literature. I discovered the wonders of non-European fiction such as The Color Purple, Paradise and Their Eyes Were Watching God, and identified with female writers such as Margaret Atwood and Katherine Mansfield. Now that I’ve left university I read purely for pleasure and as a result I have a ‘to read’ pile nearly as tall as myself. Recently I’ve developed a penchant for comedy fantasy and sci-fi writers like Robert Rankin and Stephen Fry. I gave the Twilight books a go and they satisfied my appetite for easy-to-read slushy fiction, but in the end they could never take the place of Harry Potter in my heart or on my bookshelf. The Host is on my ‘to read’ list, however. I enjoyed The Time Traveller’s Wife and I have a couple of other books by Audrey Niffengger that I want to read soon.

So, what’s next? Hopefully I will make a dent in my ‘to read’ pile, read some more current books and write lots of reviews for you. Here’s to the next 20 years worth of books!

2 responses to “My Life in Books”