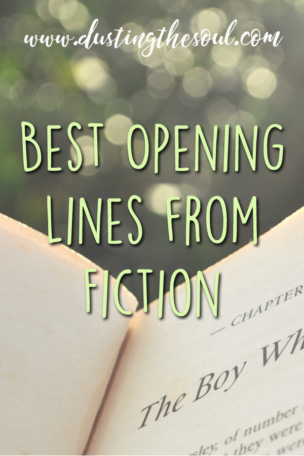 The opening lines of a novel or short story are probably the most important. They are the first thing that will be read, and readers will decide from that whether they want to continue, so you have to set them up well to make people want to read on. You don’t want to start with a boring paragraph of description. It has to be something that tells the reader some crucial information, introduces an unusual situation and is enticing enough to make them want to find out what happens next.

Here is a compilation of my favourite opening lines from literature:

“It was a bright cold day in April, and the clocks were striking thirteen.”
~George Orwell, Nineteen Eighty Four.

“Many years later, as he faced the firing squad, Colonel Aureliano Buendía was to remember that distant afternoon when his father took him to discover ice.”
~Gabriel García Márquez, One Hundred Years of Solitude.

“It was the best of times, it was the worst of times”
~Charles Dickens, A Tale of Two Cities.

“The sun shone, having no alternative, on the nothing new.”
~Samuel Beckett, Murphy

“If you really want to hear about it, the first thing you’ll probably want to know is where I was born, and what my lousy childhood was like, and how my parents were occupied and all before they had me, and all that David Copperfield kind of crap, but I don’t feel like going into it, if you want to know the truth.”
~J.D Salinger, The Catcher in the Rye.

“This is the saddest story I have ever heard.”
~Ford Madox Ford, The Good Soldier

“It was a wrong number that started it, the telephone ringing three times in the dead of night, and the voice on the other end asking for someone he was not.”
~Paul Auster, City of Glass.

“The sky above the port was the color of television, tuned to a dead channel.”
~William Gibson, Neuromancer.

“All this happened, more or less.”
~Kurt Vonnegut, Slaughterhouse-Five.

“Ships at a distance have every man’s wish on board.”
~Zora Neale Hurston, Their Eyes Were Watching God.

“There was a boy called Eustace Clarence Scrubb, and he almost deserved it.”
~C.S.Lewis, The Voyage of the Dawn Treader.

“It was the day my grandmother exploded.”
~Iain M. Banks, The Crow Road.

“I was born twice: first, as a baby girl, on a remarkably smogless Detroit day in January of 1960; and then again, as a teenage boy, in an emergency room near Petoskey, Michigan, in August of 1974.”
~Jeffrey Eugenides, Middlesex.

“We started dying before the snow, and like the snow, we continued to fall.”
~Louise Erdrich, Tracks

“It was a pleasure to burn.”~Ray Bradbury, Fahrenheit 451.

“Once upon a time, there was a woman who discovered she had turned into the wrong person.”
~Anne Tyler, Back When We Were Grownups.

“I write this sitting in the kitchen sink.”
~Dodie Smith, I Capture the Castle

“Marley was dead, to begin with.”
~Charles Dickens, A Christmas Carol.

“There was a hand in the darkness, and it held a knife.”
~Neil Germain, The Graveyard Book.

“In a hole in the ground there lived a hobbit. “~J.R.R Tolkien, The Hobbit

“Kidnapping children is never a good idea; all the same, sometimes it has to be done.”
~Eva Ibbotson, Island of the Aunts.

“As Gregor Samsa awoke from a night of uneasy dreaming, he found himself transformed in his bed into a gigantic insect.”
~Franz Kafka, The Metamorphosis

“All children, except one, grow up.”
~J.M Barrie, Peter Pan.

“The telephone was ringing wildly, but without result, since there was no-one in the room but the corpse.”
~Charles Williams, War in Heaven.

What are your favourite opening lines from fiction?