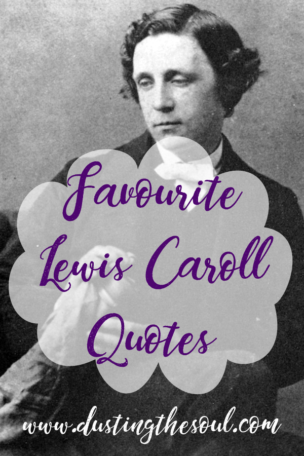 “Always speak the truth, think before you speak, and write it down afterwards.”

“Begin at the beginning and go on till you come to the end; then stop.”

“Everything’s got a moral, if only you can find it.”

“I can’t go back to yesterday – because I was a different person then.”

“One of the secrets of life is that all that is really worth the doing is what we do for others.”

“She generally gave herself very good advice, (though she very seldom followed it).”

“Sometimes I’ve believed as many as six impossible things before breakfast.”

“‘What is the use of a book’, thought Alice, ‘without pictures or conversations?”

“‘When I use a word,’ Humpty Dumpty said in rather a scornful tone, ‘it means just what I choose it to mean – neither more nor less.'”

“I wonder if I’ve been changed in the night? Let me think. Was I the same when I got up this morning? I almost think I can remember feeling a little different. But if I’m not the same, the next question is ‘Who in the world am I?’ Ah, that’s the great puzzle!”

“I think I could, if I only knew how to begin. For, you see, so many out-of-the-way things had happened lately that Alice had begun to think that very few things indeed were really impossible.”

“One day Alice came to a fork in the road and saw a Cheshire cat in a tree.
‘Which road do I take?’ she asked.‘Where do you want to go?’ was his response.‘I don’t know’, Alice answered.
‘Then’, said the cat, ‘it doesn’t matter’.‘–so long as I get SOMEWHERE,’ Alice added as an explanation.‘Oh, you’re sure to do that,’ said the Cat, ‘if you only walk long enough.'”

“‘For it might end, you know,’ said Alice to herself, `in my going out altogether, like a candle. I wonder what I should be like then?’ And she tried to fancy what the flame of a candle is like after the candle is blown out, for she could not remember ever having seen such a thing.”

« When is a Hole Not a Hole?
Androgynous Poem »