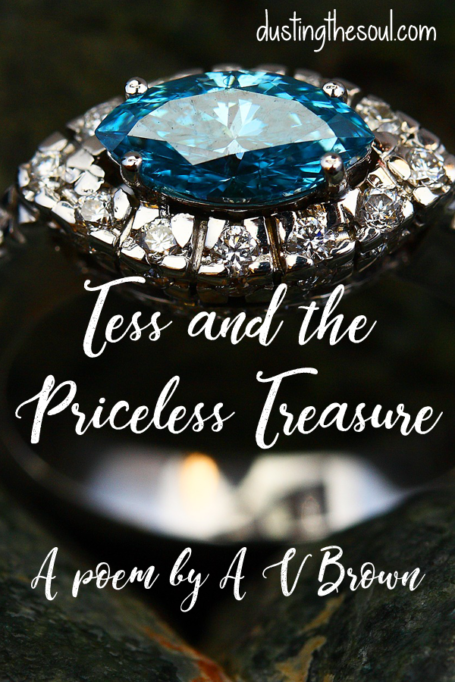 One morning, Tess from Little Dell
Was washing clothes beside the well,
When Anna, Jane and Cecily
Ran towards her full of glee.
“Look upon our golden rings!
See our shiny, handsome things.
The market stalls are filled with gold,
Hurry, before the best is sold!”
Tess packed a bag and hurried down,
To see the fair from out of town,
Where travellers showed exotic wares,
Shining, sparkling traps and snares.
Some were pearl (so overrated),
Others gold (most likely plated).
Nothing special caught her eye,
So with a shrug, she passed on by.
Returning on the dusty track,
A beggar with a crooked back
Called out to Tess for drinking water
or some bread to feed her daughter.
Tess was poor but also kind,
She shared her lunch and didn’t mind.
The beggar smiled at Tess’ charm
And placed a trinket in her palm.
Tess took the gift and journeyed on
Until the day was almost done,
Then came across her friends from Dell
Fetching water from the well.
She showed them all the tarnished ring,
“What a poor and worthless thing!”
Indeed the metal was tinged with rust,
The stone was faded, caked in dust.
“What an ugly thing you’ve bought!”
Said Tess, “I chose the better sort,
For though it only cost some bread,
It’s worth more than your gems”, she said.
The girls all laughed at Tess’ treasure,
They would never know her pleasure.
She wiped it clean and when she’d done
It shone like sapphire in the sun.
~by A V Brown 03/01/2007